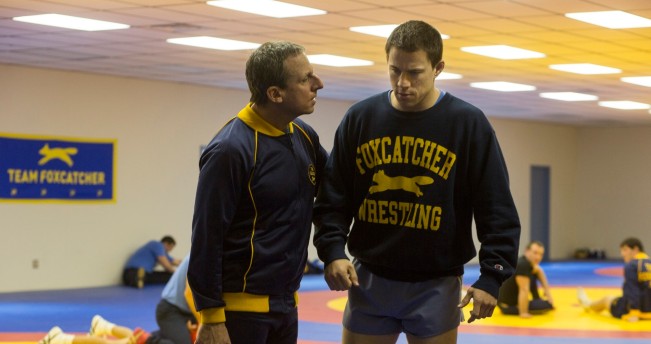 One of the most well received films at this year’s Cannes Festival, winning Bennett Miller the Best Director award, Foxcatcher arrived in London with a lot of expectation behind it. Whilst it did not, for me, quite match the lofty accolades bestowed upon it in May, it is still a fascinating film, and one which features an absolutely transformative performance from Steve Carell, whose portrayal of John du Pont paints a magnificent picture of emotionally needy insanity. Even if the rest of the film does not quite match him, he alone makes it almost essential viewing, and is backed up by strong writing, direction and supporting cast.

Foxcatcher tells the true story of the aforementioned du Pont, an eccentric multimillionaire from an incredibly successful family who, after taking an interest in wrestling, had the Olympic Gold Medallist Schultz brothers (Channing Tatum as Mark, and Mark Ruffalo as Dave) stay on his farm. Of these three main characters, only Dave Schultz is ever close to being psychologically healthy, with both du Pont and Mark suffering from crippling inadequacy and parental abandonment issues. Oddly, it is in these defects that Carell’s du Pont is most reminiscent of the actor’s most famous role, The Office’s Michael Scott. Carell is no stranger to dreadfully cloying characters, and it really shows here, in what is most likely an Oscar-winning performance. The other two leads are also very good, with Ruffalo as reliable as ever and Tatum showing a side to him that has never been seen before. Not only that, but all three performances are bolstered by some astonishing make-up work, ugly-fying Carell and Tatum in particular.

However, despite Foxcatcher possessing some really brilliant displays of acting, the fact that they take up so much of my memory of the film betrays a problem in that the rest of the film is not as compelling, in a similar vein to last year’s Dallas Buyer’s Club (although Foxcatcher undoubtedly has better writing and direction). The cold distancing of the audience from the characters is a choice that only pays off in fits and starts, effective when it comes to making du Pont a genuinely sinister figure, but falling short of keeping the audience engaged with the plight of the Schultz brothers. Also, in making du Pont a perhaps overly pitiful figure, some moments come across as slightly contrived, such as when he talks about his only childhood friend turning out to be a paid actor.

The wrestling itself (this is a pseudo-sports movie after all) is very well choreographed, despite being a secondary part of the movie, a violent but homo-erotically intimate dance, an interesting parallel with the relationship between du Pont and Mark Schultz. It is this relationship, by turns physically and emotionally abusive, fatherly and occasionally with a hint of the homosexual, which elevates Foxcatcher above being just a ‘good’ film with excellent performances. It lends itself to some truly chilling and disconcerting moments as du Pont, forever powerless in the shadow of his mother (a cameo from Vanessa Redgrave) begins to abuse his position over Mark.

With Foxcatcher, Bennett Miller has cemented himself (following Capote and Moneyball) as a great director of performance-driven, slightly too distant biopics. The film is laden with potential and could have been one of the year’s best, if it were just a little more engrossing and had a little more energy. As it is, it is a very interesting watch, elevated by three top-drawer performances, at least two of which should be bothering the Oscar voters. Carell in particular is magnetic, although it comes as no surprise that he can so brilliantly play such a character. Not quite a classic, Foxcatcher still absolutely merits a trip to the cinema.

N.B. – I saw this film with an absolutely dreadful audience, which was initially very distracting, so my opinion on the film may very well have been influenced by this, given that the overall experience was so frustrating.

Foxcatcher is scheduled for a UK release on January 9th 2015