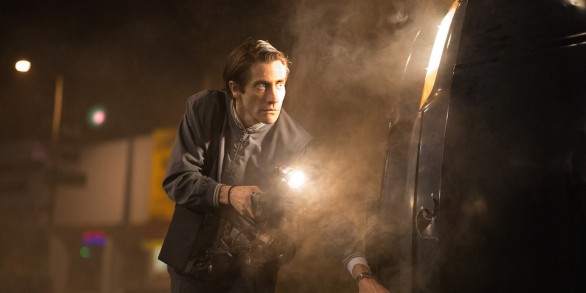 Common wisdom asserts that the streets of LA after dark are not places you want to be. Violent crime runs rampant, the cops are too busy to help you, and, if you’re particularly unlucky, you’ll find your personal hell being recorded and sold by an emotionless ‘stringer’ – the freelance purveyors of real-life tragedies. It’s this third element of Los Angeles’ murky underworld which is tackled by Dan Gilroy’s Nightcrawler, a supremely confident, thrilling and well-performed tale of one man’s desperate struggle to stay employed, at any cost. It’s one of the year’s best films, a surprise made all the more impressive when you remember that it is Gilroy’s first directorial effort and that his last two scripts were the lacklustre Real Steel and Bourne Legacy.

Jake Gyllenhaal leads the film as Lou Bloom, a sociopathic near-vagrant on the LA streets who discovers he has both ability and passion for crime journalism. It is an astonishingly good performance, undoubtedly the best of Gyllenhaal’s career, and, even though the film has nothing to do with its Marvel mutant namesake, one that remains just as detached from being fully human as a blue-tailed teleporter. Bug-eyed, gaunt and animalistic in appearance, Bloom talks like an alien who has learned human language through corporate pamphlets and ‘inspirational’ Facebook posts. He is an incredibly disconcerting screen presence, part Patrick Bateman, part Travis Bickle, and exudes a sense of physical menace, despite not being particularly imposing.

His disregard for human lives leads him to be a particularly desirable employee in a field where emotions have no place, and he starts a professional relationship with the show runner on an LA morning news show, Nina (Rene Russo, icy and sympathetic in turns). The early success allows Bloom to buy a better camera and hire an assistant (Riz Ahmed, refreshingly not cast in a ‘Muslim’ role), which is where the main action of the film really kicks off. As well as being a fascinating character study, Nightcrawler is also a very exciting thriller, tensions and stakes building satisfyingly throughout the film and culminating in a truly brilliant sequence, unfortunately spoiled in the movie’s trailer. Every scene has at least one edge of the seat moment, and that is a momentous achievement, given that the subject material is not superheroes, spies or soldiers.

All of these effects are amplified by the soundtrack, juxtaposing uplifting tunes with some of Lou’s darkest actions. It’s almost enough at points to get you to root for him, before being consistently reminded that he is nothing better than a monster, dabbling in thievery, blackmail and lying to the police. It was a brave choice to have the lead character of the film not even function as an antihero, with his only redeeming feature being his frightening work ethic. There is no suave charm here, just a black hole of morality, made compelling by great writing and direction and a mesmerising performance from Gyllenhaal. The final product is a heady mix of Taxi Driver’s psychotic leading man, Heat’s masterful use of Los Angeles and the best car action since Drive, making Nightcrawler an absolute must-see.

Written and Directed by Dan Gilroy