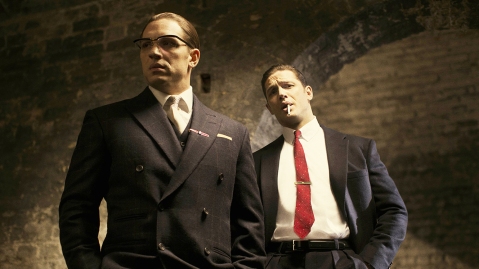 For all its flaws, Legend is not a film that’s lacking in ambition. Not only having his two lead characters played by the same actor, writer and director Brian Helgeland has tried to make a gangster movie that is both Goodfellas and Lock, Stock and Two Smoking Barrels. Unfortunately, whilst it possesses the omniscient voiceover of the former and the smirking London swagger of the latter, it lacks Scorsese’s masterful moral uncertainty and Ritchie’s sly self-awareness that made their films such leaders in the genre. As a showcase for the talents of Tom Hardy, appearing as both Ronnie and Reggie Kray, Legend does its job well, and it is a perfectly competent gangster movie, but it fails to make a truly convincing case for why the story of London’s most notorious thugs needs to be told again.

Wisely, Helgeland never moves into full biopic territory, instead focusing on just the late ‘60s, when the Krays rose meteorically to power before crashing back down again almost as quickly. We see a lot of the story through the eyes of Reggie Kray’s wife, Frances Shea (Emily Browning), who provides the narration, an interesting twist on typical crime film storytelling that also highlights a lot of Legend’s problems. In focusing on this love story, other plot elements get left out. For example, much mention is made of the interest the American Mafia is taking in the Krays, but, other than an initial meeting, nothing really comes of their presence. Given that the runtime clocks in at over two hours, nothing would have been lost had this thread been cut entirely, which may have also have helped to alleviate the slight pacing issue that plagues the film, particularly in the second half.

To her credit, Browning does good work with the always thankless role of gangster’s wife, and manages to inject proper emotion into scenes that would otherwise have been largely flat. Equally impressive is her ability to stay noticeable in sequences otherwise utterly dominated by the dual performance of Tom Hardy. As mad brawler Ronnie, he sometimes slips into caricature, but his portrayal of the suaver and smarter Reggie is undeniably magnetic, balancing the murderous rage that possesses Ronnie with something more controlled and charming. You can easily see how the people of the East End fell in line with this ambitious and authentic local boy, simultaneously lovable and terrifying. With this in mind, it’s a shame that Hardy’s performance as Ronnie isn’t as nuanced, as his open homosexuality and involvement in a series of political sex scandals makes him arguably the more interesting brother.

Ronnie’s unique lifestyle (involving both orgies and also living in a quiet caravan in the woods) isn’t the only thing differentiating Legend from so many other blokey Brit thrillers. Most notably, it’s actually nowhere near as violent as its subject matter and 18 rating would suggest (that 18 more likely comes from an astoundingly liberal use of ‘c**t’). It’s also quite funny at points in the first half, allowing Hardy to flex the deadpan comedy muscles he’s been relaxing since he stole the show in Inception. This engenders enough good will to get you through the uninspired music choices and occasionally shoddy dialogue – at one point, Frances’ voiceover directly tells the audience that their expectations are being subverted. This bizarrely confident breaking of the fourth wall is hardly warranted, as the moment that we apparently don’t see coming is in fact rather predictable.

Legend is definitely a better film and less enamoured with the Krays than its marketing and title suggested, and even though the fine supporting cast (David Thewlis, Christopher Eccleston, Paul Bettany) is used too sparingly, the lead performances are especially memorable. It’s far from being one of the Great Gangster Movies, but Tom Hardy and a slightly more cerebral approach to the story than was expected make it worth a watch.

Written and Directed by Brian Helgeland