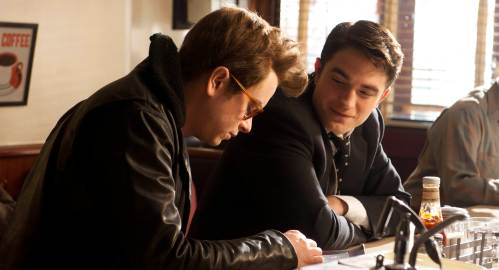 The short but incredibly vibrant life of James Dean has received its fair share of attention since he died at the age of just 24. It’s natural that Hollywood would find him so fascinating, someone who simultaneously represented and reacted against superstardom, and was then tragically killed before he could fully decide on either direction. Anton Corbijn’s new take focuses less on Dean himself than his friend-for-a-month, Dennis Stock, the Life Magazine photographer who shot the iconic Times Square image. Whilst this makes sense, especially given that Corbijn is still more famous as a photographer than a director, and avoids criticisms of following an overly-familiar story, Dane DeHaan’s version of the troubled star makes you wish that he had taken the lead.

Robert Pattinson, who again shows that he’s one of his generation’s most underrated actors (along with fellow Twilight star Kristen Stewart), takes the role of Stock. Fed up with working as a ‘red-carpet guerrilla’ and taking studio-sanctioned set photos, he chances upon James Dean at a party thrown by Rebel Without a Cause director Nicholas Ray. Sensing something uniquely authentic in the young actor, he attempts to persuade both Dean and his editor John Morris (Joel Edgerton, as understated yet effective as ever) to allow to him to shoot and publish a photo essay on the soon-to-be star in the month before the East of Eden premiere. Rounding out the main cast is Ben Kingsley as studio head Jack Warner, who phones in a ridiculous and cartoonish performance that belongs in another film entirely.

Dane DeHaan is finally given the role he deserves as Dean, a compassionate portrait of a gifted yet troubled young man. He’s by turns effervescent, charmingly bumbling, and deeply sad. Whenever Corbijn gets us alone with DeHaan, and that is a rare occurrence in the film, he wordlessly conveys a very believable unhappiness and frustration that is profoundly touching. However, Life’s insistence that we mainly follow the story of Dennis Stock means that the truly affecting scenes are few and far between.

This is not the fault of Pattinson, who turns in some of his best work here, but it’s really hard to care about Stock. He’s hardly likable, his awkwardness and social ineptitude frustrating rather than endearing, and is clearly a terrible father, at one point even vomiting on his own son thanks to a cocktail of booze and Benzedrine. As a way to highlight how bright and energising Dean’s presence was, it’s very effective, but spending almost two hours in the company of a self-aggrandised photographer declaring himself an artist is hard to bear. It helps that Pattinson and DeHaan have a solid chemistry, and the positive influence Dean has on Stock makes him into a more rounded and engaging guy by the film’s end, even if he does learn very little.

Life is clearly quite a self-reflective project for Corbijn, with the merits or otherwise of photography debated throughout the entire film. On one hand, Stock is not a likable character, often more concerned with framing than honesty, and the most emotionally effective moments occur when his camera is not aimed at Dean. Yet, once the photos are developed, particularly those of James reading to himself and his young cousin in the Dean family home in Indiana, there is a beauty to them, capturing the spirit of someone of whom the rest of the world would only ever catch a tantalising glimpse.