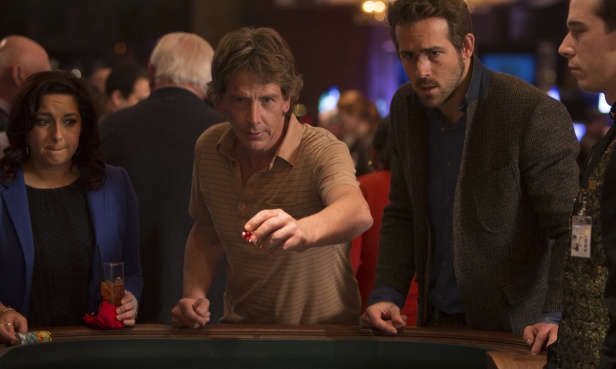 If you want to make a film that evokes the ‘70s, it’s hard to go wrong with a gambling story. Casino towns, at least according to Anna Boden and Ryan Fleck’s Mississippi Grind, don’t seem to have changed at all in the last 40 years, and, apart from size, there’s not much to tell the places themselves apart. All bathed in the same damp neon sadness, the only thing that makes any gambling town distinctive is the amount of money you can win, or more likely lose, there. Half James Caan’s The Gambler, half road/buddy movie, Mississippi Grind is a brilliantly character-driven film, with incredible performances from its two leads.

The grind of the title is the journey from Iowa to New Orleans, stopping at every possible opportunity to make some money. Perpetual loser Gerry (Ben Mendelsohn) needs to make this trip to attempt to play off the vast debts he’s racked up through his gambling addiction. Accompanying him is Curtis (Ryan Reynolds), a mysterious drifter with an uncanny ability to win. Meeting at a low-stakes poker table, Gerry realises he needs Curtis’ good luck, yet Curtis’ motives remain hidden. It’s not a malevolent interest he takes in Gerry, but one gets the impression that he may just be fleetingly entertaining himself by taking the older man on as some sort of philanthropic cause.

One of the most immediately interesting dynamics of the central relationship is that, despite Mendelsohn being the older of the two actors, it’s Reynolds’ Curtis who takes the role of the concerned and disappointed father figure. Mississippi Grind takes every opportunity to really let us get to know these characters, often at the expense of any real plot. It’s a slow-burn, but when the drama does occasionally kick into high gear, you’re deeply invested in the outcome, as you know exactly what winning or losing would mean to Gerry and Curtis.

Ben Mendelsohn once again proves that he is one of the very best actors working today, Gerry’s despair rolling off the screen in waves. His ability to make any scene uncomfortable just by being in it is utterly unmatched, but here it’s down to his obvious desperation, rather than the queasy sliminess of Slow West’s Payne or Bloodline’s Danny Rayburn. Every smile betrays the deep sadness of a man who is headed for total misery and doesn’t know whether to fight against it or paddle with the current to his inevitable doom. Reynolds’ presence is vital, his charismatic star power playing off Mendelsohn perfectly and stopping the film from getting too glum. Sienna Miller and Analeigh Tipton also impress in relatively brief appearances, Miller simultaneously kind and cynical with Tipton conveying painfully well the anguish of someone forcing themselves to be naïve because reality is too depressing.

All the major players generate explosive chemistry off of one another, and whilst their character descriptions might sound too bleak, Mississippi Grind avoids the trap of being overly grim. It’s not a happy tale, nor should it be, but Reynolds provides some levity, and any success for Gerry and Curtis, no matter how minor, is genuinely uplifting. Boden and Fleck’s script gives you just enough clues to work out backstories without forcing any clunky exposition, and then lets you decide if you want to contemplate the sad circumstances that’s left each character where we first find them. It may wrap up a little too neatly, but the story is so secondary to the character studies that it isn’t particularly important. It’s too small a film to make any real impact in the awards season, but Ralph Fiennes in A Bigger Splash aside, Mississippi Grind has the best lead actor of the year, backed up by subtle storytelling and legitimately engaging characters.

Written and Directed by Anna Boden and Ryan Fleck