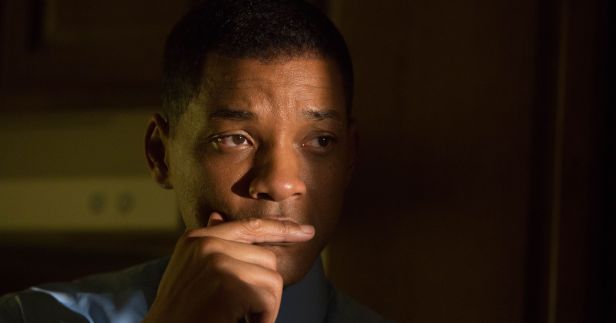 Outrage at American institutions seems to be very fashionable this Oscar season. We’ve already had Spotlight’s damning indictment of the Boston Catholic church as well as Adam McKay’s furious attack on Wall Street in The Big Short. Now comes the Will Smith-starring Concussion, targeting the NFL for its prolonged denial that playing American Football could lead to long-term, life-ruining and even suicide-inducing mental problems. Peter Landesman’s film is not as fiery as the two mentioned above, but it’s still a solid and engaging examination of Americanism and the corruption of big corporations, whilst also proudly wearing its love of science on its sleeve.

Smith plays Dr. Bennett Omalu, the neuropathologist that discovered Chronic Traumatic Encephalopathy (brain damage caused by repeated head-on collisions) in football players. Importantly, and also inviting further comparison with Spotlight and The Big Short, Omalu is an outsider, a Nigerian who moved to America for work, easily finding employment thanks to his plethora of incredibly impressive degrees. No one in America wanted to consider that the nation’s favourite sport was lethal to its players, themselves heroes in the eyes of the public. Omalu faces opposition to his findings not just from the NFL itself, but also from angry fans, including one his colleagues, who forces Omalu to fund his research into CTE himself.

Smith gives his best performance in years as Omalu, deftly playing the total sincerity of the man without descending into schmaltz or a saintly caricature. Omalu himself is not a particularly complex character, but Smith imbues him with life in a way that reminds you why he became one of the world’s biggest movie stars. Even when competing with an overpowering score and some choppy editing, Smith’s charisma and star power are in full force here, especially refreshing after a few years of films like After Earth and Winter’s Tale. Heading up the supporting cast, Gugu Mbatha-Raw feels slightly wasted as Prema Mutiso, a fellow Nigerian migrant and medical practitioner who lives with Omalu out of necessity when she first moves to America before ending up marrying him.

In focusing on the researchers behind the story (Alec Baldwin and Albert Brooks also appear as a team doctor and a science academy chairman respectively), Concussion achieves its greatest success. Not only are its heroes scientists, they are, by any other movie’s standard, ‘mundane’ scientists. Landesman manages to make the scientific process entertaining, even when it just includes poring over hundreds of peer-reviewed journals or looking at various near-identical slides under a microscope. However, despite Concussion’s love of science, and Omalu’s refusal to take anything at face value (he’s more interested in the why than the how of death) the film totally shies away from the pressing question of Omalu’s faith. Seeing as his profession and passion means he rejects received wisdom, a clash of these principles and unswerving Christianity would have been fascinating, but these beliefs go entirely unquestioned throughout.

Towards the end, Concussion becomes too hokey by half, with the appearance of the ghosts of the football players who ended up killing themselves totally at odds with the clinical realism portrayed up to that point. Yet, for the most part, Smith saves the film from its own poor decisions, creating a character you enjoy rooting for. It’s not enough to make Concussion a real Oscar contender, but watching one of the planet’s favourite stars give a performance worthy of his talents is almost worth the ticket price alone.

Written and Directed by Peter Landesman

Concussion is released in the UK on 12 February 2016

One thought on “Concussion Early Review”