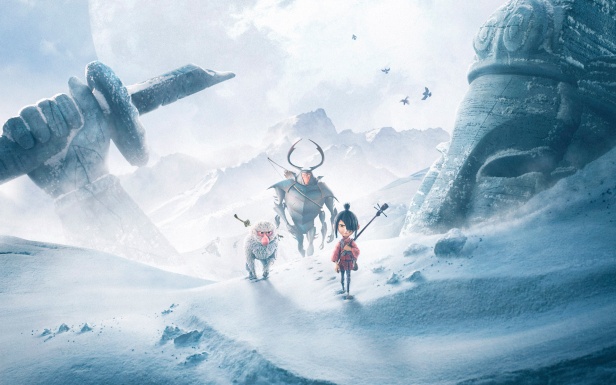 ‘If you must blink, do it now’, intones Kubo (Art Parkinson) at the start of his grand adventure in Kubo and the Two Strings. We’re used to being given such demands as audiences by grizzled veterans or a wise old sensei, but here the command comes from a 12 year old boy. It’s just one of many ways that Laika’s latest effort immediately makes itself one of 2016’s most individual films, with a sometimes unflinchingly sad story of family mixing with origami inspired stop-motion beauty and the magic guitar at the centre of it all. Opening on a gut-wrenchingly intense shipwreck, and following that up with a believable look at what it’s like growing up with a brain damaged mother (voiced by Charlize Theron), Kubo still never forgets to be an exciting and heartwarming kids’ movie first and foremost.

Kubo’s stricken mother has incredible magic powers, and some of these abilities have been passed down to her son, who makes a living animating origami figures with his mystical shamisen, telling tales of great samurai warriors. Laika’s fantastic stop-motion work has never been more magical than it is here, beautiful origami action melding with staggering technical achievements like a 16 foot tall skeleton puppet.

Everyone in the local village loves Kubo and his stories, but his happy-ish status quo is destroyed when he disobeys his mother’s orders and stays out after dark. He’s being hunted by his evil aunts (both voiced by Rooney Mara), who wish to steal his eye under mysterious orders from his grandfather, and without the cover of sunlight, they find him, razing the village and killing his mother. Waking up in a blizzard, Kubo is saved by Monkey (Theron again), a toy of his brought to life to protect him. Guided by one of Kubo’s paper samurai, he and Monkey set out on a quest to find the three pieces of armour strong enough to allow him to fight his grandfather, the Moon King.

Along the way, they meet Beetle (Matthew McConaughey), a cursed but exceptionally skilled warrior with ties to Kubo’s legendary father. With the three heroes assembled, the quest can begin in earnest, and it would be nearly impossible to overstate the majesty of the various locations they visit. Giant statues buried in snows give way to great lakes at sunset and underwater realms, with a dream sequence set in a temple the most visually striking non-Neon Demon scene of 2016.

Even whilst enticing us in with their beauty, these vistas never lose a sense of threat and danger. Though not as scary as Coraline, Kubo is not lacking for spooky moments. His aunts are properly frightening, speaking and giggling without moving their mouths; like all of Kubo’s monsters, their design wouldn’t feel out of place in a Dark Souls boss battle – a testament to Laika given that the Souls series has the best monster designs in all of videogames. With this contrast between beauty and horror as well as its highly unorthodox story (again, much of the plot hinges on a magic guitar), Kubo and the Two Strings cements itself as one of 2016’s true originals.

In fact, it’s when the film makes concessions to animation/children’s film conventions that it falters slightly. When Beetle isn’t pulling off bow and arrow trickshots, he’s a bit too generically bumbling, and the writing gets a bit clunky as Kubo delivers the film’s Big Final Message (although the visuals of this particular scene completely save it). Up until the end, the idea of reliance on family and how circumstances force that reliance to change is handled originally and affectingly. It’s very far from enough to sink the film at all, but it’s a slight disappointment just as it reaches the finale (which also features a couple of plot revelations that you’ll see coming from about halfway through the runtime).

Director Travis Knight was particularly drawn to this story as it allowed him to explore his own relationship with his parents, and that personal touch is keenly felt in the finished product. The relationship between Kubo and his mum is approached honestly, and it’s genuinely warming to see the makeshift family unit of Kubo, Monkey, and Beetle grow together. A scene where the animal adults teach Kubo to fish before sharing the spoils of their efforts for dinner is truly lovely.

McConaughey and Theron are key in making these scenes work as well as they do, and Art Parkinson does an incredible job with his first ever voice acting role. Other films that look this good may see that as an excuse to ease up on the character work or tell a simple story, but that wouldn’t cut it for Laika, fast approaching Pixar and Ghibli as one of the world’s definitive animation studios. Kubo and the Two Strings doesn’t quite match the studio’s career high of Coraline, but is still the year’s best animation and essential family viewing.