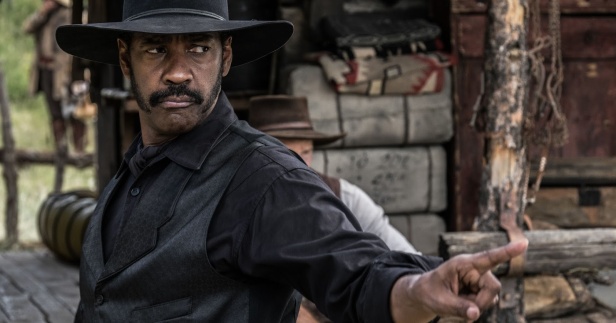 A remake of a remake that itself has already been remade, one could possibly argue that Antoine Fuqua’s Magnificent Seven is the perfect example of Hollywood eating itself for a lack of original ideas. Yet, with a multi-ethnic new team, bombastic set-pieces, and great performances across the board, this new Seven earns its place amongst 2016’s better blockbuster crop without feeling like a step-for-step retread of what’s come before. It’s hardly at the level of the best westerns of the last few years, but it’s still very fun to see the genre back at this level of budget and obvious mainstream appeal.

Denzel Washington heads up the new incarnation of the Seven as Sam Chisholm. A highly skilled warrant officer (read: state-sponsored bounty hunter) with a keen sense of justice, he’s convinced by homesteader Emma Cullen (Haley Bennett) to avenge a town oppressed by murderous industrialist Bartholomew Bogue (Peter Sarsgaard). Despite Chisholm’s considerable capacity for violence, he knows it’s a fight he’ll lose alone, so he sets about recruiting a team that stands a chance against Bogue’s armies. Some join for honour, others for promises of riches, but all sign up in the full knowledge that they’ll probably die in the process.

Josh Faraday (Chris Pratt) is the first recruit, a gambler with a complete mastery of sleight of hand. Chisholm buys back the horse Faraday lost in a game of cards, and just like that the two are the closest of allies. The Magnificent Seven takes its time assembling the team, but once they’re all together there are no hints of doubt or infighting, despite the various ethnic divides and the late 19th-Century setting. Led by a black lawman, with Hispanic, Korean, and Native American members, perhaps more could have been made of this group of ethnic outsiders saving an entirely white town, but their mere inclusion as main characters with plenty of agency feels revolutionary enough in the current Hollywood climate.

Nic Pizzolatto and Richard Wenk’s script gives strong characters for all the actors to work with, from empathetic assassin Billy (Byung-Hun Lee) to the incredibly named veteran Goodnight Robicheaux (Ethan Hawke), but suffers from pacing problems in the first half. Recruitment of the Seven takes a little too long, leaving too little time to get to know the ins and outs of the team dynamic before they arrive at the town they’re set to defend. Thankfully, things really start picking up from there, and seeing the town come together to build defences against the encroaching Bogue army is rousing stuff.

Fuqua directs the action with zip and flair, evolving from traditionally framed duels (he embraces old Western tropes with gusto) to the grand scale of the final battle. Masses of men and horses descend upon the town, which responds with dynamite traps, snipers, and the superheroic skills of Chisholm’s band of warriors. It’s about as kinetic and visceral as a 12-rated film can be, with some genuinely brutal deaths, and no qualms with killing off major characters. A Gatling gun ripping through the town marks a decisive point where Magnificent Seven transitions from fun action caper to a lethal war film.

Washington does an excellent job as Chisholm, heading up a really great ensemble. His intimidating charisma plays well off of Pratt’s dark-edged silliness, and each member of the team brings something unique in their presence. Hawke plays the ‘damaged but too proud to admit it’ role in his typically insightful way, and even Vincent D’Onofrio’s very odd performance as a hulking but childlike mountain man grows on you eventually. Only Martin Sensmeier, as Native warrior Red Harvest, feels a little short-changed, but he still gets a couple of moments where he really shines.

With its diverse cast and ultra-rich villain, Magnificent Seven goes some way to tapping into today’s political climate, as big business tries to shoo away hardworking, honest locals. As the Seven are gradually accepted into the township (there’s no out and out dialogue about race, but Chisholm and Billy are subject to plenty of pointed glances) this commentary is phased out to make way for the action and brotherly bonding. This is no bad thing, as for a big budget tentpole, there’s already a surprising amount of calm before the storm.

Some of this slowness works, but lots of it doesn’t. The first act goes on too long, forcing the second to pass by all too quickly. Scenes in which the whole team just hangs out are raucous joys where you fully believe in these hastily built friendships, but are too few and far between. Bogue also feels underdeveloped as a character, which is to be expected in a film with seven heroes, but is also a shame given that Sarsgaard imbues him with real menace, a sadistic coward on the verge of insanity.

I also felt that Magnificent Seven didn’t quite stick the ending, which for a while looks like it’s going to end on an unexpectedly original and powerful note, before descending into rote predictability. It’s not enough to sink the film by any means, especially as the bombastic battle that’s come before takes plenty of risks, but comes as a disappointment just before the credits roll. Then again, as a continuation of a series based around timeless concepts of honour and selfless heroism, perhaps a dose of the expected is exactly what is needed as it draws to a close.