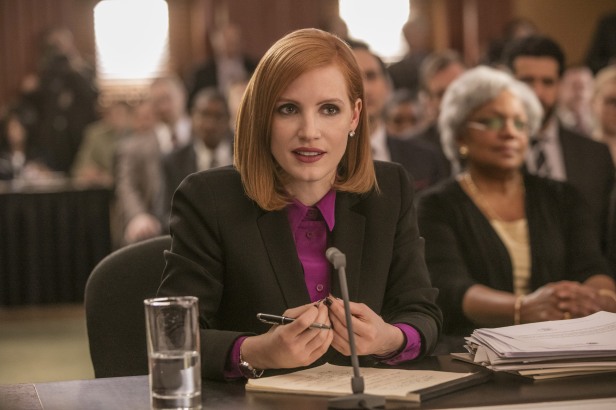 Given the current American political climate involves a lot of vague longing for the ‘good old days’ of polite politicians, it seems only fitting that a film illustrating how the American system has always been broken should come from a British writing-directing team. Focusing on lobbyists and the relationship between the money of big firms and the power of DC senators, John Madden’s Miss Sloane presents a world of cynical corruption, where rules and regulations are only adhered when financially expedient. Yet, despite this, there’s also a very optimistic side to this Jessica Chastain vehicle, refreshing in a time of frightening anti-intellectualism and pessimism in politics, but also providing Miss Sloane with a tonal problem that it can never fully overcome.

Elizabeth Sloane (Chastain) is one of DC’s most influential and effective lobbyists, having long since sacrificed any genuine principles in favour of the thrill of the political win. Her methods are slightly shady, but given that she keeps getting money and power for the right people, these indiscretions are overlooked by her boss (Sam Waterston) and the various clients and senators that she looks after. Delighting in seemingly impossible challenges, Sloane is convinced by a far smaller lobbying agency, (led by Mark Strong’s Schmidt) to abandon her firm to fight for an increased gun control bill.

Intercut with an ethics committee hearing about Sloane’s attempts to get this new legislation passed, much of the film feels like we’re watching a true story, and the references to real life mass shootings push this idea even further. However, Miss Sloane is entirely fictional, and the elaborate schemes of the title character are of a heightened tone that, whilst fun in and of themselves, don’t fit with the atmosphere of authenticity on display elsewhere. One pivotal scene of a mugging at gunpoint suffers damagingly from this mood whiplash, turning what should be a terrifying encounter into something more confusing.

Moment to moment, the film fares a lot better than when considering its overall atmosphere. It moves at a heady pace, so the over 2 hour runtime never feels like a slog and Chastain is fantastic in the lead role. Dressed like an international assassin (the costuming here may well be the highlight of the whole movie), she owns every moment of Miss Sloane. Sloane is a layered character, and in the film’s strongest scene, all of her many repressed feelings come rushing to the fore in a moment of quiet drunken desperation. Chastain plays this moment superbly; conveying the heightened emotional state of tipsiness without ever going over the top.

At the head of the supporting cast is Gugu Mbatha-Raw, bringing heart to what could have been a slightly thankless audience surrogate role. Willing and able to see through Sloane’s various tricks and self-deceptions, she’s a bit of a victim of the plot, but never lets this dull her performance. Elsewhere, Jon Lithgow has a fun role as the senator in charge of Sloane’s hearing – with a character arc that essentially consists of getting progressively angrier – and Michael Stuhlbarg is predictably excellent as a menacingly furious rival lobbyist.

Sloane’s team within her agency fares less well, with much of the bullpen banter and overtly ‘cynical’ philosophising about the state of the US landing with a dull thud. For a film about Capitol Hill and gun control, Miss Sloane is not as political a piece as one may assume, and it’s clear that first-time writer Jonathan Perera is far more comfortable with a character study than with exploring any wider themes. Elizabeth Sloane is a fascinating character, with Chastain on top form, and deserves a more consistent story in which to shine.