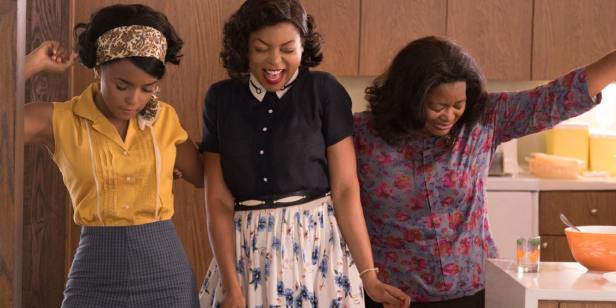 After mechanic, mathematician, and computer programmer Dorothy Vaughn (Octavia Spencer) breaks through NASA’s colour barrier due to consistently sterling work, her white supervisor (Kirsten Dunst) tells her ‘despite what you may think, I don’t have a problem with y’all’. Vaughn’s response of ‘I know, I’m sure you believe that’ is probably the single most important line of Hidden Figures, illustrating just how far we still have to go in our acceptance, and subsequent eradication, of unconscious biases, no matter how egalitarian we consider ourselves. In an era where overt racism and sexism has taken political power, any message about how we can try and improve things is more than welcome, especially when it’s packaged in such an otherwise fun film.

Telling the true story of three of the many black women who worked as computers for NASA before the arrival of the IBM, Hidden Figures balances baffling maths with an inspiring, if predictable, tale of pushing through obstacles to change things for the better. Alongside Dorothy, we have gifted mathematical genius Katherine Gobel (Taraji P Henson) and driven engineer Mary Jackson (Janelle Monae). We first meet them as they try and fix their broken down car, and each of the three women has their character established with impressive speed and economy of storytelling in this very first scene.

After being accosted by a white cop for the offence of ‘being in a car while black’, their NASA credentials swiftly change his tune, and it’s not long before he’s offering them an escort into work to do anything he can to help stop the Red Menace. Set in 1961, the Cold War is at its height, and writer-director Theodore Melfi manages to integrate the geopolitical importance of the story without ever letting this context overpower the rest of the plot. As the Soviets get Yuri Gagarin into space, space programme director Al Harrison (Kevin Costner) realises he needs the best possible mathematician to get their pilot John Glenn (Everybody Wants Some’s Glen Powell) to touch the stars as soon as possible.

This ‘best possible mathematician’ is Katherine, who immediately faces racist misogyny from all corners of her new office. Immediately, she is mistaken for a janitor, and her supervisor John Stafford (Jim Parsons with a permanently sour expression) refuses to believe she could improve on the work of a white man. With segregation still enforced in Virginia, Katherine can’t even go to the bathroom without heading back to her pre-promotion building. Henson does a great job in conveying the crushing weight of these ceaseless put-downs without ever letting despair take over her performance.

All three leads are great, Octavia Spencer chalking up another in a long line of memorable roles and Janelle Monae further proving the acting skill she showcased in Moonlight. The chemistry between the three is fantastic, making for warmly funny exchanges in a friendship that feels natural and real. With Costner, Dunst, and Mahershala Ali in support, Hidden Figures is a real actors’ showcase, powered by authentic and funny dialogue from Melfi and co-writer Allison Schroeder.

This writing can, however, sometimes fall flat during more obviously ‘iconic’ moments, which have a habit of skirting dangerously close to self-parody, those these are few and far between. There is also an occasional problem of sudden and notable tonal shifts, especially between big speeches and running to the toilet gags, which happens about three times. Arguably, such mood whiplash is inevitable in a film which has both Hans Zimmer and Pharell Williams on the soundtrack, but Hidden Figures is entertaining enough that these complaints swiftly fade away.

Women, especially women of colour, are written out of history with alarming frequency, and Hidden Figures is a fine rejection of that trend, telling an underreported story of black women whose minds changed the course of history. As such, it’s an obviously Important film, but balances that seriousness with a very welcome sense of fun. The early 60s were a time of segregation and unbelievable sexism, but there were people striving inexorably for progress, with civil rights, new waves of feminism, and the race to see as much of the universe as possible. Now, when it feels like things are going backwards and people would rather look at their feet than up at the sky, Hidden Figures is a vital reminder that amazing people can push the world forward, whether the world goes willingly or not.

Hidden Figures is released in the UK on 24 February 2017