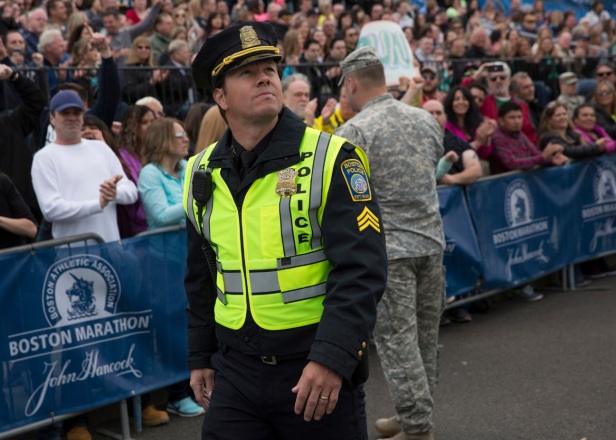 With Lone Survivor and Deepwater Horizon, the team of director Peter Berg and star Mark Wahlberg proved itself as one that could produce powerful and painstakingly accurate reproductions of recent examples of real-life heroism. Taking on a Navy Seals war story in the former, and tackling an oil rig explosion in the phenomenal latter, Patriots Day provides Berg and Wahlberg with a different kind of challenge. Not as technically demanding as either of its predecessors, it instead faces accusations of being exploitative and telling the still brutally fresh story of the Boston Marathon Bombings too soon. Fortunately, Patriots Day overcomes these concerns with its veracity, excitement, and consistent and heartfelt tributes to the real people of Boston.

Unlike his previous Berg characters Marcus Luttrell and Mike Williams, Wahlberg’s Boston police sergeant Tommy Saunders is an invention. A composite of a series of different Boston cops, he pops up at a series of vital junctures in the story, giving an incredibly chaotic event and aftermath some semblance of real structure. The manhunt following the bombings took days and thousands upon thousands of people, so a sharp focus on any one individual story was always going to be difficult. Every other character, however, from the couple who lost their legs in the attack (Patrick Downes and Jessica Kensky, played by Christopher O’Shea and Rachel Brosnahan) to bomber Dzokhar Tsarnaev (Alex Wolff) is entirely real, with their experiences recreated as truthfully as possible.

Berg stages the bombing itself superbly, ratcheting up the tension for what seems like an impossibly long time. When the inevitable blast finally arrives, it’s heralded by masterfully disorienting sound design and editing that melds grainy cellphone footage with crystal clear digital imagery. It’s presented starkly, both in the explosion and immediate aftermath, with the gory human impact neither shied away from nor gratuitously overexposed.

It’s here where Wahlberg’s Tommy Saunders really shines, his initial instinctive heroism giving way to bone-deep, shuddering exhaustion and fear. These sorts of roles allow Wahlberg to show his full dramatic capabilities as an actor and as he recounts the horrors he witnessed to his wife (Michelle Monaghan in a thankless role), it’s hard not to be moved. As the film progresses, however, its insistence on returning to its leading man starts to slightly detract from the experience. Whether it’s the Boston police commissioner (John Goodman) butting heads with the FBI agent in charge (Kevin Bacon) or student Dun Meng (Jimmy O Yang) making a brave escape from the Tsarnaev brothers after they hijack his car, Saunders is always there, straining credibility.

Patriots Day’s treatment of the Tsarnaev brothers is its most interesting and original angle, and Berg handles it with careful and smart writing. Older brother Tamerlan (Themo Melikidze) is the true believer, while Dzokhar is a strung-out, media-savvy, and desensitised drug dealer, seemingly viewing the ‘cause’ as nothing more than a way to satisfy his desire for meaningless violence and theft – in other words, a very American kind of terrorist. Berg forgives Dzokhar for nothing, but goes some way to explore exactly what pushes someone into mass murder.

Alex Wolff is excellent as Dzokhar, bearing an uncanny physical resemblance to the real thing, and also capturing the strange mix of bloodlust and cowardice that surely defines a terrorist’s personality. With the exception of Wahlberg, not many other actors get the time to make an equivalent impression, though JK Simmons, as chief of police Jeffrey Pugliese in the sleepy Boston suburb of Watertown, of course does plenty with his limited screen time. Getting some memorable action beats in as the Watertown PD face off against the Tsarnaev brothers, he also completely sells the draining shock of such an encounter.

Pistols, machine guns, and homemade bombs devastate a residential street, and though Simmons gets a classic JK Simmons quip at the end of the shootout, Pugliese’s return home is presented with complete sincerity. Collapsing into his wife’s arms, it’s a bittersweet moment that captures the impact of senseless violence on its unsuspecting victims, but also shows the power of love against the hate that the Tsarnaevs represented. Though the speech given at the end by Saunders about this power may be overly sentimental and on the nose, Patriots Day earns it, a love letter to the spirit of Boston and the ability of people to come together to face a tragedy in inspiring unity.