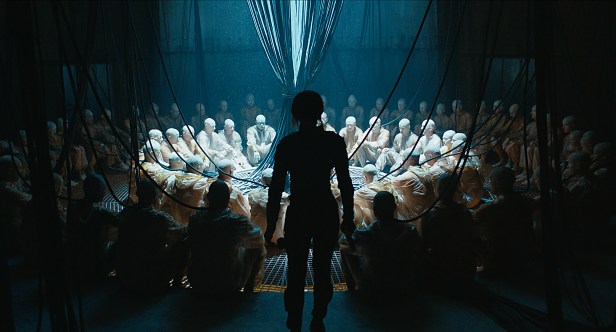 In adapting one of the most iconic Japanese manga/anime series of all time into live action film, the white British director of Snow White and the Huntsman might not be the first name that comes to mind. And yet, Rupert Sanders’ take on Ghost in the Shell manages to, thanks to its sincerity and enormous surfeit of style, really work. Picking elements from all across the series’ lore, but most recognisably based on Mamoru Oshii’s 1995 classic anime, it might not end up feeling like the most original film, but in bringing this visionary universe to life, Sanders has given us a cyberpunk epic with surprising soul.

Centred on a rather generic and easily spoilable conspiracy plot, it’s the threads of character that keep Ghost in the Shell moving, with first-of-her-kind Major (Scarlett Johansson), a human brain (ghost) in a fully synthetic body (shell) trying to come to terms with her uniquely lonely existence. Her relationships with her squadmates in special police unit Section 9 keep her grounded, but no one can understand the way she experiences the world, and the writing team of William Wheeler, Ehren Kruger, and Jamie Ross raises interesting questions of whether a human brain without memories is that different from a machine.

Obviously, the Hollywood take was never going to match its source material in terms of depth, but this isn’t a complete dumbing down, not afraid to be weird or oblique in places. Taking time out for small, ‘nothing’ scenes, like Major going to feed her partner Batou’s (Pilou Asbaek) dogs, builds the world naturally, making up for the fact introducing audiences to this version of the future requires some really leaden exposition early on. The words ‘ghost’ and ‘shell’ are awkwardly overused, and the villain Kuze’s (Michael Pitt) story is undercooked, but strong performances, great individual scenes, and the phenomenal visuals render these complaints as rather petty quibbles.

Johansson’s casting has been met with justified anger, contributing as it does to a continued lack of representation of Asian actors in major mainstream roles (especially as only one main role actually goes to a Japanese actor, with Takeshi Kitano as the chief of Section 9). Yet, if movies could be made in an apolitical vacuum, there couldn’t be a better fit for the role of the Major. With her track record of intelligent performances in roles with mind/body disconnects melding with her unearthly beauty, Johansson makes for an unnervingly convincing cyborg superior being.

Her supporting cast are really solid too, Asbaek in particular giving a disarmingly layered and noble performance, even behind his weird cyborg eyes. Michael Pitt is given less to do, but brings some pathos to his patchwork baddie, though the emotional heft of the film is stolen by a one-scene supporting character. An encounter between Major and a bereaved mother (Kaori Momoi) has a strange, shuddering power that leaps up out of nowhere to hit you in your core. It’s one of the moments that lends Ghost in the Shell more depth than just its very flashy exterior.

But, really, it’s the exterior that makes the film so worthwhile, with some of the loveliest visuals in blockbuster history. Strikingly grimy physical dystopian design is overlaid with incandescently gorgeous CGI that imbues future Tokyo with colour, life, and even flashes of background humour in what is otherwise a self-serious film. Of course, being based on one of the most aesthetically influential works of the past 30 years is going to help with crafting a meticulously detailed and memorable world, but nothing can take away from the astounding achievement of these effects artists. Not only is the film so stylish that it barely needs a story, it’s one of the rare times where the 3D experience is actively preferable to the 2D.

Sanders keeps the action beats short and sharp, always slickly choreographed and executed and never outstaying their welcome. A couple of battles are lifted nearly shot-for-shot from the 1995 film, and to see them work so completely in ‘reality’ is a testament to the technical achievements of this 2017 update. Long considered impossible to translate from its manga/anime roots to a western live action piece, Ghost in the Shell can proudly join the ranks of adaptations of the ‘unadaptable’ that have more than survived in their transition to the big screen.