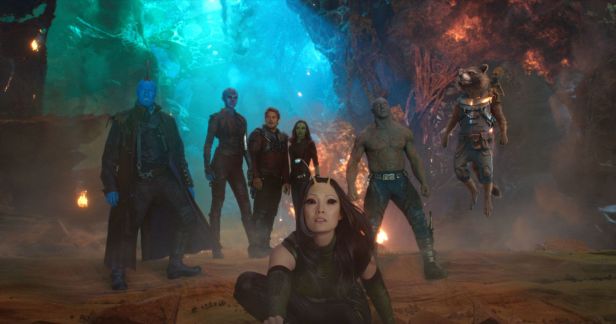 With a subtitle of Volume 2, it should be immediately obvious that James Gunn’s follow up to his surprise smash hit Guardians of the Galaxy is not so much a sequel to the original’s story, but more a continuation and heightening of its mood. Doubling down on everything that made its predecessor such a unique and beloved blockbuster, from the jokes to the colour palette, it lacks the freshness of Guardians 1 but is still an absolute blast of a sequel that proves that the MCU is still more than willing to take risks as it extends its reach into the wider cosmos.

As the first film was all about bringing the team together as a makeshift family, this instalment splits them apart. Peter Quill (Chris Pratt), Gamora (Zoe Saldana), and Drax (Dave Bautista) are summoned by the immensely powerful celestial being Ego (Kurt Russell), who turns out to be Peter’s biological father. Meanwhile, Rocket (Bradley Cooper) and Groot (now a baby, but still voiced by Vin Diesel) are joined by blue-skinned former foes Yondu (Michael Rooker) and Nebula (Karen Gillan) after all four get in to major trouble with Yondu’s mutinous Ravager crew. With all five original heroes returning, Yondu and Nebula getting expanded roles, and the introduction of all new allies and threats, Guardians 2 could have been exhaustingly overstuffed.

To an extent, it is all a bit too busy, but Gunn gives every player their due, finding time for all this character work by sacrificing plot. Sure, the Guardians are being hunted by the golden-skinned ‘superior race’ The Sovereign, led by the haughty High Priestess Ayesha (Elizabeth Debicki), but this story strand is left in the background after a couple of set-pieces and the main plot doesn’t actually kick off until about 75 minutes in. It’s a really bold choice, and one that pays off, the pinballing between various highly entertaining standalone moments letting the film stand apart from pretty much any other superhero movie.

Less effective is the increased reliance on the kind of comedy that the original used so fantastically. The jokes are cruder and come thicker and faster, with precious few dramatic moments making it out without being undercut by a gag. Some work, and there are some properly hilarious lines, but the humour feels forced more frequently than it should, and I’d have liked a little more sincerity when Gunn goes for the heartstrings, with tonal shifts occasionally leaving you unsure how to feel.

That being said, there is also an emotional core to the story, with Yondu in particular having a genuinely affecting arc, and the sisterly bond between Gamora and Nebula getting plenty of attention. Even Drax develops as he forges a bond with Ego’s assistant/resident empath Mantis (Pom Klementieff), who’s just as bad at social interaction as the hulking grey maniac. Peter himself is, strangely, often sidelined, interacting mainly with Ego and separated from his teammates. Russell is great in this role, subtly teasing out Ego’s sinister side as he takes Peter further and further under his wing.

Visually, Guardians 2 is a triumphant spectacle of colour and weirdness, outdoing even the exceptionally trippy Doctor Strange as the MCU’s premier feast for the eyes. From the idyllic surface of Ego’s planet to a freakish look at the effect of FTL travel on mammalian bodies via the retro-futurist look of The Sovereign’s main battle station, there isn’t a single dull frame, and Gunn stages the action sequences in these settings with a carefully planned chaos that is simply joyous. Mass spaceship dogfights and close quarter brawls splash right off the screen, thanks in no small part to tremendously immersive sound design.

Once again, Quill’s Walkman provides a series of backing tracks to the action, and though I think that the selection of songs in Awesome Mix 2 actually surpasses that of the first (Cat Stevens’ ‘Father and Son’ is a particular highlight), their deployment is rarely as inspired. Then again, an unbroken tracking shot of Baby Groot (utterly adorable and used just the right amount) dancing to ‘Mr Blue Sky’ is pretty much all you need to elevate Gunn’s use of soundtrack above most other filmmakers working today. If Marvel keep letting their directors be this idiosyncratic in their ever-expanding universe, the endless plans for the MCU’s future are looking mighty compelling.

Written and Directed by James Gunn

2 thoughts on “Guardians of the Galaxy Vol 2 Review”