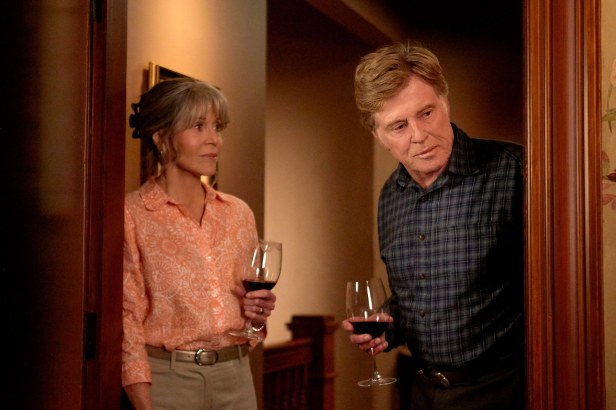 Though this isn’t the first time that Robert Redford and Jane Fonda have worked with Netflix (on The Discovery and Grace and Frankie, respectively) the unfortunately titled Our Souls At Night (say it out loud, fast) is still a big get for the online platform. A romantic dramedy starring two film legends that should definitely gain older viewers for the site, it’s a shame that Ritesh Batra’s film is so blandly weightless, as its lead couple are as excellent value as we’ve come to expect over decades of their illustrious careers.

Redford and Fonda play two widowed retirees, Louis and Addie, for whom loneliness, especially in the evenings and nights, has become a sadly familiar burden. Wanting to break out of this rut, Addie comes to Louis, whom she vaguely knows thanks to her friendship with Louis’s late wife, with a proposal – that a couple of nights a week, the two should sleep together. It’s a literal offer of sleep, no sexual motive in play at first, and the pair start bonding through late-night conversations and confessions. They have natural chemistry, and soon their relationship is the talk of their gossipy small town.

Nothing really happens in the first half of Souls, just a series of conversations between Louis and Addie and their various friends, like the sparky Ruth (Phyllis Somerville) and the grating, standoffish Dorlan (Bruce Dern). This is fine, and though not particularly involving, it’s never boring and Redford and Fonda are great to be around. What throws the film off its axis is the sudden introduction of a plot in the form of Addie’s bitter son Gene (Mathias Schoenarts) and nervous grandson Jamie (Iain Armitage). Suddenly, the flimsiness of Souls’s emotional pull becomes all too apparent, and moments that should land with a thump instead hit like a feather.

Armitage puts in a good child performance, and Redford and Fonda play well off of him, but Schoenarts is woefully miscast in a role that could have gone to anyone and wastes his animal magnetism entirely. His shaky accent (which is rare for the Belgian, who is generally a vocal chameleon) only serves to highlight this. Grand revelations from the past and hospitalising injuries arrive on screen with the same impact as scenes of Louis putting together a model train set or Addie going garden shopping and the emotional detachment has a cumulative effect, making the finale very hard to care about.

Had it just stuck to its central relationship, Souls may not have been an immensely more interesting film than it is currently, but its weaknesses would not have been so apparent. Adapted by Kent Haruf (alongside co-writers Scott Neustadter and Michael Weber) from his own book, the litany of problems with the script are familiar from various other novelist-to-screenwriter transitions. Had it not been for its superstar leads, it would be impossible to recommend Our Souls At Night, but they do elevate the material enough to ensure some entertainment value remains.