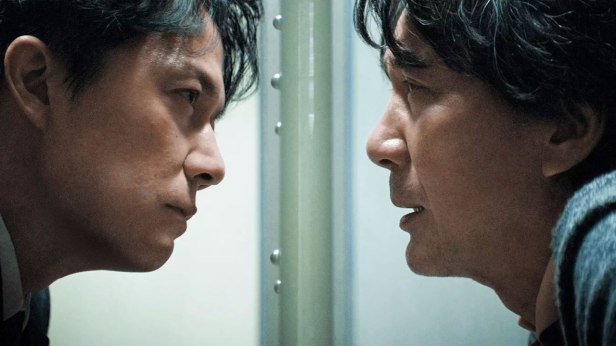 Hirozaku Koreeda has made his hugely acclaimed name with small family dramas, which makes the mystery courtroom procedural The Third Murder a step out of the Japanese auteur’s comfort zone. It’s a move with mixed results, raising interesting questions of the value of objective truth and punitive justice, but the central plot is too shrouded in lies and complexity to completely satisfy. A slow burn and twisty tale, the end destination isn’t quite worth the two hour journey to get there, but great acting and character work make sure there’s good stuff along the way.

The Third Murder is not a whodunit, and we see the murder of the factory owner by defendant Misumi (Koji Yakusho) in the very first scene. Misumi even admits to the crime to both his lawyers and the police, leaving the challenge for the lead defence attorney Shigemori (Masaharu Fukuyama) that of avoiding the death penalty, and the key mystery for the audience as Misumi’s motivation. Hidden amongst this lead story are a series of subplots exploring the relationships between fathers and daughters. Shigemori’s daughter is acting out in his absence, shoplifting and learning to fake tears for sympathy, Misumi’s refuses to even come and act as a character witness in his trial, and Sakie (Suzu Hirose), the child of the victim, comes to be the lynchpin of the film’s philosophical discussions.

For the most part, it’s all a bit too weighty and abstract to entertain as this genre at its best does, but it will leave you asking questions after the credits roll. Koreeda eschews easy answers, and even the conclusions he eventually comes to are portrayed as one off fixes, not universal solutions. But the interrogations themselves work far less on the more literal level – Misumi is a pathological liar to the point where every conversation leads to a fresh, exhausting twist.

This haze, brought on by the misremembered details and investigative dead ends may well be Koreeda’s exact point, but though it’s thematically fitting, it doesn’t make for a great watch. For a while, it appears we’re really getting somewhere, as Shigemori and his baby-faced assistant make headway into a road-trip investigation, and it’s very involving, but it’s broken back down too soon by another revelation that completely deflates most of what’s come before. Koreeda’s characters are richly drawn, and Shigemori finds himself getting dangerously familiar with Misumi’s mind in a series of spellbinding dream sequences, but you wish they’d be given more to do as the story unfolds.

Across the cast there isn’t one weak link, and there’s an easy chemistry between everyone in the lawyers’ offices that lets their scenes flow smoothly and entertainingly, even as they make little to no progress. It’s indicative of The Third Murder as a whole that it’s at its best during conversations about nothing in particular, a crime film that doesn’t want to be a crime film, and suffers for the box it traps itself in.

Written and Directed by Hirokazu Koreeda

The Third Murder does not yet have a UK release date