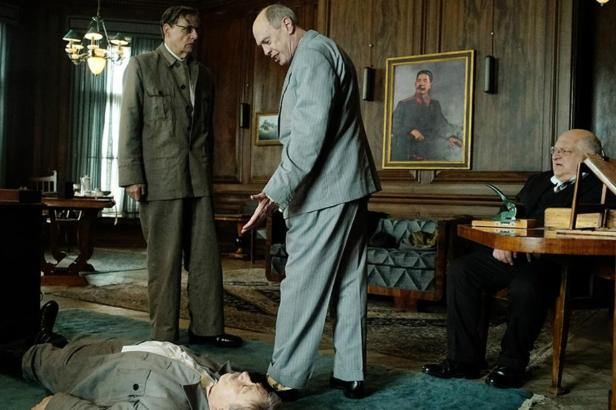 The work of Armando Iannucci has often focused on the absurdity of power and its more than imperfect use in the hands of very fallible people. With The Death of Stalin, he reaches the logical conclusion of this theme, highlighting the darkly idiotic heart of one of the most far-reaching and violent dictatorships the world has ever known. As Stalin lay dying in 1953, no one dared enter his room to help him, for fear that they would get themselves killed for admitting the great leader’s human vulnerability. It’s a ridiculous, and deeply tragic, way for anyone to die, and it’s this line between laughs and gut-deep fear that Death of Stalin walks at all times.

At first, none of the members of Stalin’s Politburo know what to do (whether he’s even actually dead is a question that plagues them for much of the opening act), but as the situation settles, each of them make their own grab for power. Heir apparent to the Soviet throne Malenkov (Jeffrey Tambor) seeks an orderly transition, NKVD head Beria (Simon Russell Beale) turns to violence, and tenacious survivor Khrushchev (Steve Buscemi) simply wants to keep his head above water. All of them court potential power players, like Stalin’s daughter Svetlana (Andrea Riseborough) and war hero General Zhukov (Jason Isaacs).

It’s an incredible cast – in smaller roles, Rupert Friend, Paddy Considine, and more make huge impressions – and none of them get left out or feel shortchanged. Tambor seems to physically shrink as the story goes on and it becomes obvious that Malenkov won’t get the position he desires, while Isaacs barrels through everyone else, a hilarious freight train of effortless power. Stealing the film, though, is Russell Beale, finally as good on screen as he is on stage in a truly odious villain role. That I can make it this far into the cast list without even mentioning Michael Palin’s brilliant tragi-comic display as the ultra-loyal Molotov is testament to Stalin’s huge strength in depth.

Iannucci’s script is very, very funny, with killer one liners and farcical set-pieces, but he never handles the violence of the chaotic handover with a wink. Brutal murders are everywhere, and they’re all frightening and wrenching, the last moments of many victims genuinely pitiful. Life never mattered much in the Soviet Union, even at its highest echelons, and the human impact of this dearth of empathy is made clear and tangible.

This darkness encroaches further and further into the heart of the film as it moves towards its genuinely distressing endgame. Laughs get fewer and further between as the real threat of an untimely and humiliating end closes in on the leads before a savage denouement, shocking despite its utter inevitability. Every shift in power, instead of perhaps signifying a chance for the USSR’s recovery, brings with it a different schedule of executions, some of these changes saving lives, some ending them, and many arriving just too late for the poor soul they involve. It’s nail-biting, tragic, and hilarious, a perfect snapshot of this terrifying moment in history.

The Death of Stalin’s origins as a historical graphic novel occasionally make themselves felt in its stylised character introductions (Zhukov’s being the standout), but for the most part, Iannucci sticks with the fly-on-the-wall realism that so defined The Thick of It, In the Loop, and Veep. The grey cold of Moscow seeps off the screen into your bones, and the un-disguisable discomfort etched on the faces of the major players is infectious. In this toxic atmosphere of fear and paranoia, it doesn’t always seem right that comedy should thrive so well, but it’s in the gap between petrification and manic laughter that Iannucci’s film finds its superb niche.