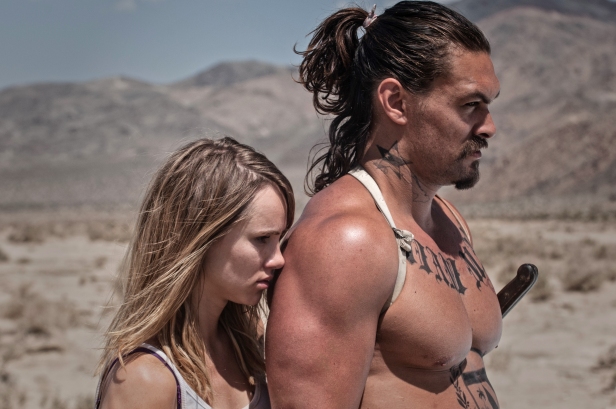 Though it was made a good while before the Trump presidency actually got underway, The Bad Batch’s September 2017 UK release couldn’t feel more timely as a comment on the state of the US. A drug-addled, near-future wasteland of cults and grifters, with shredded American flags making a handful of appearances, Ana Lily Amirpour’s film makes no apologies for its ‘death of the nation’ atmosphere or foundational criticism of the US justice system. Society’s ‘undesirables’ are branded with a number, and hurled by police into a lawless, cannibal-filled desert, where the only refuge is the town of Comfort, behind a border wall guarded by a Mexican militia. The Bad Batch is never particularly subtle, but it hits hard with its gripping weirdness, powerful subtext, and outrageous style.

One of these undesirables is Arlen (Suki Waterhouse), who swiftly finds herself at the mercy of a Muscle Beach-themed tribe, who spend their days lifting ludicrous weights and their nights eating their captives’ limbs. Though Arlen is certainly a victim of their ways (she loses an arm and a leg to them), Amirpour doesn’t really moralise the cannibalism, with Miami Man (Jason Momoa) both a people eater and a loving father with huge artistic talent. After Arlen escapes from the camp and finds sanctuary in Comfort, a series of bad decisions and blind luck put her and Miami Man together in search of his missing daughter.

Dialogue is sparse in The Bad Batch, with everyone choosing their words very carefully or, in the case of Jim Carrey’s trolley pushing, all-seeing drifter, eschewing speech completely. Instead, snatches of story are picked up from the unique world that Amirpour has built, and brilliant wordless exchanges, the best of the bunch being Momoa and Carrey silently bargaining for information. Communicating through gestures, writing, and sketched portraits, it’s a truly unique scene in a film packed with originality.

On the surface, plenty of comparisons with Mad Max Fury Road can be drawn, from the barren and hallucinatory desert heat to the amputee heroine, but The Bad Batch absolutely carves out its own stylistic niche. Its aesthetics range from truly apocalyptic junkyards to a semi-functional civilian town (with, hilariously, a working photocopier right in the centre) lorded over the moodily lit palace of The Dream (Keanu Reeves). The fizzing heat haze envelopes you so slowly that you don’t notice yourself being pulled into the film’s world, but when the credits roll, the snap back to reality is sudden and harsh.

The visuals and atmosphere have to be as formidably excellent as they are to carry what is a rather weak plot. Not much that happens actually ends up mattering, and a few story pivots don’t make much sense, though it’s never less than fully absorbing to watch these characters go through the motions. An eclectic and masterfully chosen soundtrack and wonderfully surreal touches like The Dream’s heavily pregnant, Uzi-wielding bodyguard team keeps you constantly on your toes in this strange, sweaty fever dream of movie.