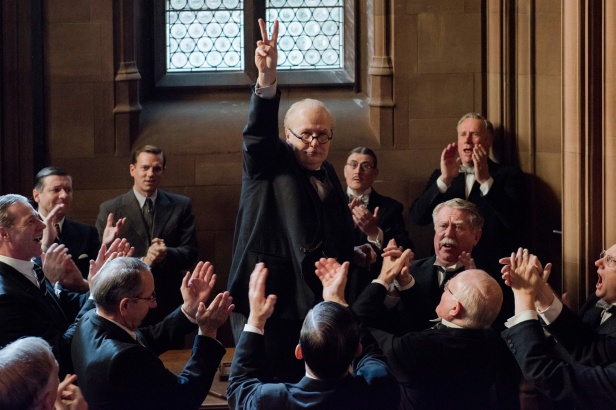 Rare is the year in which two films are released that act as perfect companion pieces to one another, but 2017’s utter obsession with the Miracle of Dunkirk and Winston Churchill has led to exactly that. Joe Wright’s Darkest Hour complements Christopher Nolan’s Dunkirk as the overview of the grand political crises happening simultaneously to the on-the-ground evacuation itself. However, where Dunkirk drew its immense power from its ferocious leanness, Darkest Hour gets bogged down in far too much exposition and explanation, leading to an often entertaining, but often overly flabby and sloppily edited film.

Wright is no stranger to the Dunkirk evacuation, with his five-minute tracking shot of the crowded beach in Atonement remaining his career highlight. Here he pulls back from the soldier’s-eye view to the political scheming that set the whole thing in motion, as newly-appointed Prime Minister Winston Churchill (Gary Oldman) fights against his appeasement-loving party to secure a fighting chance for Britain in World War 2. It’s a story that never quite escapes the inevitability of its own ending, but watching Churchill’s ranting machinations remains fun throughout. The main problem is that Anthony McCarten’s script finds it necessary to contextualise every scene in the big historical picture, and as a result, there’s a lot of rather stilted scene-setting dialogue.

Gary Oldman is great value as Churchill, even if it’s not a performance that’s going to end up in the upper tier of this most phenomenal actor’s career highlights. It is a rather obvious play for the Oscar that has so long been owed to him, but he still manages to capture Churchill’s insecurity and sense of self-deprecating humour, making for a less overtly serious portrayal than either John Lithgow’s in The Crown or Brian Cox’s in Churchill. Elsewhere, the cast is made up of the BBC faces and Game of Thrones alumni one would expect from a British period piece, from Lily James as Winston’s personal typist to Stephen Dillane as Viscount Halifax, head of the appeasement movement.

The most surprising casting is the Australian Ben Mendelsohn as King George, bringing a more traditionally regal feeling to the beloved monarch than Colin Firth or Jared Harris. Unfortunately, he’s not really given enough to do, and the scenes with Mendelsohn and Oldman, which should be electrifying with two of the world’s finest actors sharing a space, end up disappointingly functional. This is Oldman’s show, shining through the remarkably good jowl prosthetics, and no one is allowed to upstage him.

Darkest Hour is never less than utterly visually sumptuous, sets and characters dressed impeccably, and some inspired shots and uses of lighting turning the film’s stagy feel into a distinct advantage. Darkness’s encroachment on Churchill and Britain as a whole becomes more and more suffocating as the Germans push closer to Dunkirk, a powerful technique that Wright uses sparingly. It would have been nice if this restraint had extended to the score, which is rather overbearing, especially during Churchill’s speeches to parliament. These are some of history’s most celebrated orations, performed by one of Britain’s greatest acting talents – they’re more than enough to power a film on their own.