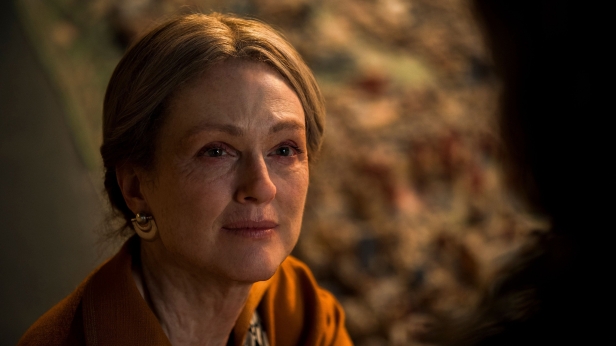 It’s rather trite to call a movie ‘a film of two halves’ at the best of times, but when said film actually takes place in two different time periods? That’s just downright lazy, which is why it pains me so much to say that it is the most fitting possible descriptor for Todd Haynes’ Wonderstruck. Set in both the 1920s and 1970s, the gulf in quality between the two segments means that Wonderstruck is an inventive and warm-hearted film that can never cohere into a more remarkable whole.

We open in the ‘70s with the recently bereaved 12 year old Ben (Oakes Fegley) being struck deaf by a lightning bolt. Confused and desperate, he flees the hospital and catches a bus from his Michigan home to New York in search of his absentee father. Meanwhile, 50 years prior, the born-deaf Rose (Millicent Simmonds) sets out on a similar adventure, heading to the Big Apple to escape her cruelly impatient father and meet silent film star Lillian Mayhew (Julianne Moore). Of the two story strands, it’s the ‘20s that are by far the standout, an effusively bubbly adventure boosted by Haynes’s choice to have it play out just like the silent movies that Rose loves so much.

Everything is impeccably executed to capture the feeling of the pre-talkie era, from the musical cues to the exaggerated mouth movements that encourage lip-reading, and it all looks gorgeous. The monochrome New York skyline is a visual highlight, along with a magnificently imaginative flashback told entirely through action figures, though Haynes and DOP Edward Lachman don’t quite capture the same incredible sense of place and time that they did with Carol’s slice of the ‘50s. As Rose’s journey continues, you’ll find yourself wishing that her story made up the entire film.

But, alas, we must switch between her and Ben, whose search for his dad ends up encompassing a grand, decades-old family mystery. Writer Brian Selznick, adapting his own novel, shoehorns these developments in in a way that doesn’t feel natural or possess the requisite intrigue or power to make the glacial reveals worth the wait. Fegley gives a spirited performance, and a scene where he chases a newfound friend through the New York Natural History Museum is as joyous as one would hope, but the children’s dialogue isn’t particularly believable, a problem that the silent segments can gracefully sidestep.

These script issues really make the ‘70s sequences start to drag, a problem that is not helped by ropey cinematography or a pretty lousy score. Clear, sweeping shots of Ben’s exploration the city are undermined by messy dream sequences and occasional dips into handheld shakicam that simply do not work. Musically, it’s a rare misstep from Carter Burwell (though he does very fine work with his ‘20s movie homaging), never sure which elements of ‘70s songs it wants to invoke and rarely fitting with the film’s action or tone.

As a family-friendly adventure, Wonderstruck is more than serviceable, and in having two deaf children as its heroes, there’s no doubt that it’s an important film as far as representation goes. Yet, it is fundamentally let down by its inconsistency, and as a follow up to the wonderful Carol, it falls pretty far short. Simmonds is fantastically expressive as Rose, and her travels are soothingly lovely to watch, but you can never shake the feeling that you’d rather be watching a full silent-movie tribute by Haynes than going through this film’s needless convolutions.

Wonderstruck does not yet have a UK release date