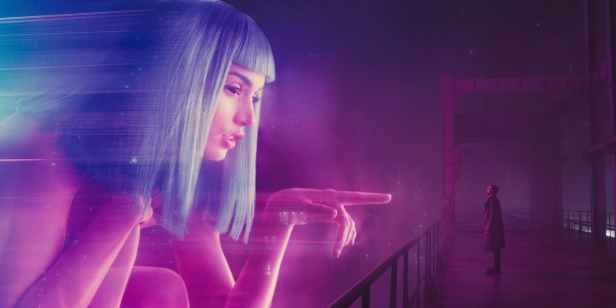 Forget everything the trailers for Blade Runner 2049 told you. Not to better enjoy the plot or avoid spoilers (far from it, almost nothing of the film’s actual story made it into the marketing), but because this is not the film that was sold. Those trailers suggested a sci-fi actioner, with a mystery to be solved while fighting against a tangible bad guy, and Denis Villeneuve’s sequel to Ridley Scott’s classic is something quite apart from that (though there are secrets to uncover). It’s nothing like any conventional blockbuster and far, far better for it, a magnificent, magisterial masterpiece that easily stands up to its revered predecessor.

A quick caveat: I’m reviewing 2049 having only seen the film once. Whilst that is more than enough to be amazed by it, it will require one or, more likely, two subsequent viewings to get everything out of it. For a first watch, it demands to be seen on the biggest screen possible in order to bowl you over with its aesthetic majesty, and to fully capture its labyrinthine, epic plot and the grand ideas it toys with, I’ll need to sit down with it again and again. That shouldn’t be a problem.

It’s hard to discuss any sort of plot for 2049 without immediately delving into spoiler territory, as K’s (Ryan Gosling) mission takes him all over this dystopian America – 30 years after the events of Blade Runner – making grand discoveries with huge political and philosophical repercussions. An agent of the LAPD, with the same Replicant-retiring Blade Runner job that Rick Deckard (Harrison Ford) had in the original, K’s immense capability as both detective and warrior leads him deep into conspiracies, which eventually involve the much hyped return of Deckard. At home, K chooses to live with a holographic girlfriend, Joi (Ana de Armas), whom he cares for deeply, despite recognising the hollow falseness of their relationship.

As an exercise in world-building and visual splendour, there aren’t enough superlatives in the English language to adequately convey what Villeneuve, DOP Roger Deakins, and the film’s art department have achieved here. Every shot is a fresh drop of the jaw, every new location both grittily real and spectacularly other-worldly. With Sicario, Arrival, and now this in the space of just three years, Villeneuve has proved himself one of the foremost directors of his generation, up there with Christopher Nolan and Paul Thomas Anderson, marrying visuals and storytelling in an unbelievably skilful way that somehow looks effortless.

He also has an army of brilliant collaborators to bring 2049 to life. As well as Deakins – who simply must win his wildly overdue Oscar this year – Villeneuve has assembled a dream team in his cast, writers, and Hans Zimmer’s music. Gosling’s performance is closer to those he gives for Nicholas Winding Refn than his joyous one-two of The Nice Guys and La La Land last year, perfectly fitting his placid killer character, and utterly selling the multiple moments where his reality is turned upside down. Ford turns in his best performance since The Fugitive as the older Deckard, fear and weariness seeping in to his usual devil may care charm.

Elsewhere, Armas does a lot with a role that could be grimly flat, and the extent of Joi’s characterisation is one of many pleasant surprises in store. Writer of the original, Hampton Fancher, returns to script the sequel, alongside 2017’s star screenwriter Michael Green (of Logan, Alien Covenant, and American Gods fame), and they are masterfully surefooted as they wrongfoot their characters and audience. It’s a ferociously intelligent deconstruction of the hero’s journey that thrills at the same time as it subverts. Violence in 2049 is weighty, wincing, and often over in a flash, with the exception, an extended brawl between K and evil Replicant enforcer Luv (Sylvia Hoeks, terrifying), so sustainedly intense that you’ll try and climb out of your seat to escape.

There are shady dealings going on behind the scenes at Wallace Corp, replacement of the now-bankrupt Tyrell Corp from the first, with sinister blind mogul Niander Wallace (Jared Leto) monologuing about angels, slaves, and his planned empire in outer space. As a character, he’s a relatively conventional villain, but he isn’t used like one, his masterplan and a burgeoning resistance against him thrust into the back, overtaken by fundamental existential questions.

Some may find this ponderous, and there is an argument to be made that, at over two and a half hours, 2049 is too long, but it’s truly exhilarating to see a big-budget blockbuster so far from the made-by-committee mould of modern studio films. Fancher and Green ask profound questions, whether it’s a casual conversation about the value of a soul between K and his superior officer Joshi (Robin Wright) or a bold dismissal of the search for grand narratives as one of life’s follies.

Stitching all these elements together is the unparalleled sense of place and time that the world of Blade Runner inherently gives you. Villeneuve’s film is certainly faithful to the original – this is still very much an ‘80s vision of our dark future – but doesn’t fear breaking away from it. There’s a lot more daylight and open space, and an excursion into the irradiated orange wasteland of former Las Vegas brings a surge of eye-popping colour to the middle of the film. Some of the unique noir style of the first is lost, but the scope that this change opens up is so ambitious that you don’t miss it.

It’s cliché to say that what makes us human and whether there’s existence beyond the physical are some of our greatest philosophical questions, but the answers and hypotheses posited by 2049 make these questions vital and electric, like they’re being asked for the first time. It’s the trick that all Great Science Fiction tries to pull off. To do so at the same time as making a satisfying sequel to a film previously thought untouchable shows Villeneuve, Deakins, Fancher and Green, and Zimmer as some of the definitive artists in their disciplines, and proves Ryan Gosling as the star of his generation.