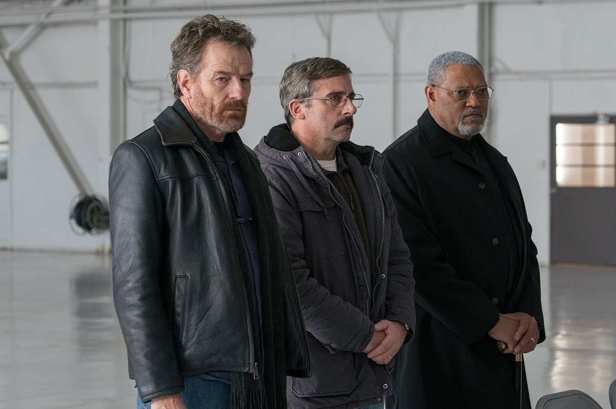 With the Before trilogy, Richard Linklater has proved that he’s a master of continuing stories, but it’s still a surprise to see him tackle a follow-up to another director’s film from 1973. Last Flag Flying is adapted from Darryl Poniscan’s novel, a sequel to The Last Detail, already turned into a film by Hal Ashby, starring a young Jack Nicholson, and though Linklater definitely honours the original, he also puts his trademark razor-sharp humanist spin on it. There’s never a wink or nudge in sight, and though this total sincerity left Last Flag Flying open to some critical snipes after its New York Film Festival premiere, it’s this element that makes the film so special.

Set in 2003, with the Iraq War in full swing, Last Flag Flying follows three estranged Vietnam war buddies, reunited by the death of the youngest trio member’s son, killed in action in Baghdad. The bereaved father is Larry Shepard (Steve Carell), known as ‘Doc’ to his military friends, just about the main character in a very evenly served cast. On his way to the funeral, he seeks out the hot-headed, anti-authority Sal Nealon (Bryan Cranston) and the reformed now-preacher Richard Mueller (Laurence Fishburne), the only people his crushed and confused soul can rely on.

This heart of tragedy powers Linklater’s film, never conveniently forgotten or underplayed for the sake of a cheap laugh. It lends the terrific performances extra power and means that the plentiful jokes come from a place of empathy, never cruelty. In fact, the film’s funniest scene – an uproarious reminiscing session in which the characters’ joyous laughter is utterly infectious – is also one of the most moving. Even as the memories reduce the men to their raucous 21 year old selves, the strain of the past 30 years never quite leaves their faces.

Of course, you need top-tier actors for this to work, and Linklater’s cast is tremendous. Fishburne’s is the funniest role, with Cranston’s jokes often, deliberately, grating as he desperately avoids taking life seriously. Both of them are very verbal, Carell impressing in a very different way. Soft-spoken, choked by grief, it’s a brilliant piece of underplayed acting. As he announces his son’s death, and later remembers his life, he breaks your heart with very little in the way of crying or screaming, aided in this endeavour by a perfect sad-sack moustache that does a lot of heavy emotional lifting.

It’s possibly Carell’s finest dramatic performance, and to give such a low key performance in the same year as his explosively energetic display as Bobby Riggs in Battle of the Sexes further proves his serious talent and range. There’s not much room for other characters outside of the lead three. J Quinton Johnson, who starred in Linklater’s previous film Everybody Wants Some, holds his ground well with the older stars, but Yul Vasquez gets short shrift as a stubborn colonel who gets forgotten about as soon as is convenient and Linklater’s roles for women are, once again, minimal.

Doc, Sal, and Mueller are a blast to hang out with, and once it becomes clear that the Marines lied to Doc about the circumstances of his son’s death, their funeral plans change into a road trip movie. Doc demands that he be able to bury Larry Jr in his hometown, rather than with hero’s honours in Arlington, and so they set about transporting the coffin across the country, in cars, trucks, and trains. Though it’s never lingered too morbidly on, there’s something wrenching about the ‘transit coffin’ that they’re transporting. With its labels of ‘head’ and ‘legs’, an entire life is reduced to a fragile, ‘this way up’ object.

It’s an unshowy film on a technical level, simple shots letting the dialogue and acting take charge. In fact, it’s not immediately identifiable as a Linklater effort if you weren’t aware going in, but his sensibility proves a perfect fit for a study of aging and loss. Last Flag Flying is not maudlin, but it is mournful, not only for the dead young men sent off to pointless wars, but also for lives lost to bad decisions and apathy. For all his bluster, Sal’s refusal to grow up has stunted him, and his slow recognition of this is one of the film’s best arcs.

In a Q+A session after the film, Linklater made it clear that this is as close to a war film as he’s ever going to make, though his beautiful love for human life has perhaps made a proper anti-war film like this an inevitability. As the Vietnam and Iraq troops are united by their respective betrayals by their government, the point is made that every generation has ‘their’ war, a hideous fact of American life. It’s not subtle, nor is it exactly an original thought, but it’s put forward in such an irresistible and soulful manner that it still hits like a hammer.

Last Flag Flying does not yet have a UK release date