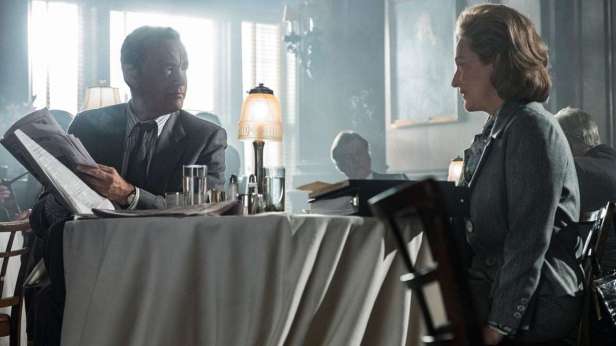 Put together in a mere six months after external factors forced the indefinite delay of Steven Spielberg’s planned 2017 entry The Kidnapping of Edgardo Mortara, The Post could not have found a more timely release. A news media hating president being brought low by high-quality journalism and incontrovertible truth and facts describes an ideal outcome for the USA in 2017, just as it did in 1971, when the Washington Post published the Pentagon Papers, turning the tide of public opinion against the Vietnam war. ‘Strike while the iron is hot’ filmmaking is a natural next step in this current prolific phase of the great director’s career, but also makes The Post too rushed to land with the weight it should.

Acting as a prequel of sorts to All The Presidents Men, The Post tackles the Washington Post’s first major conflict with the Nixon administration. They released leaked classified documents that confirmed that the US government had been lying to the people about their Vietnam policies for decades, even after the New York Times faced a federal injunction for their publication of the same papers. Leading the charge in the Post newsroom is Ben Bradlee (Tom Hanks), an idealistic reporter who believes nothing should stand in the way of the truth.

His boss, paper owner Katherine Graham (Meryl Streep) is more hesitant. Not only is she close friends with many of the Washington bigwigs who would be damaged by the story, but she has a duty to the Post itself, which needs new investors who would likely be scared off by a national scandal. The superstar leads are both on terrific form, Hanks sharper and snappier than usual and Streep the best she’s been in a long time, able to wring an entire story’s worth of excitement from the mere word ‘however’.

As always with Spielberg, the supporting cast is pretty much flawless too, packed to the rafters with brilliant actors from Bob Odenkirk to Carrie Coon to Tracy Letts. Sadly, Sarah Paulson is rather wasted as Bradlee’s wife Tony, and the running theme of the difficulties of being a woman in a man’s world is only intermittently effective. Katherine entering a board meeting as the only woman is a powerful visual that becomes a chokingly frustrating scene as she’s silenced by every man in the room, but a later moment of women falling at Katherine’s feet after a victory is utterly cheesy.

Visually, it’s a mixed bag, bustling camerawork adding excitement to a few inspired scenes, but elsewhere looking washed out and slightly plasticky. Best of the bunch is when government secret leaker Dan Ellsberg (Matthew Rhys) starts copying the documents, Spielberg deploying the same sweeping blue lights he would for an alien arrival in Close Encounters or ET, Ellsberg’s actions as monumental as first contact. The raw physicality of the ‘70s printing machinery is also extraordinary, and allows for a nice moment of journalists’ words literally shaking the earth as new editions of the Post go into production.

There’s a lack of urgency to Liz Hannah and Josh Singer’s script that rather knocks The Post down, especially towards the end. It’s not as propulsive as Spotlight or All The Presidents Men, and the conclusion’s references to Watergate only serve to remind that there’s a more exciting version of this story already in existence. It’s a necessary, well-acted, and vitally topical cautionary tale, but in the rush to get it out there clearly wasn’t time to iron out the kinks and elevate The Post to the standards that a Spielberg ode to honesty and the free press deserves.