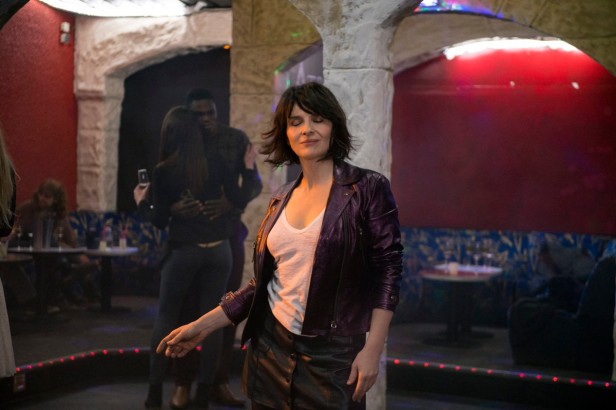 Just as Art Film Fans bemoan the lack of Claire Denis’s upcoming project High Life in the 2018 Cannes line-up, her most recent film, Let the Sunshine In, hits UK cinemas. It’s good timing, not only to buoy interest in this limited release dramedy, but also to show off Denis’s lighter side before her heavyweight English-language debut hits the international stage. Let the Sunshine In is a slight film, especially by its director’s standards, but is for the most part tremendously entertaining, as well as a brilliant showcase for its wonderful star Juliette Binoche.

As Isabelle, an artist in the midst of a mid-life crisis who is tantalisingly close to knowing what exactly she wants from life, Binoche is absolutely tremendous. Funny, vulnerable, and frustrating, it’s one of those magical performances that makes one very specific life experience somehow eminently relatable to any audience member through simple facial expressions and verbal tics. Almost all of Let the Sunshine In’s success rests on Binoche’s shoulders, and she more than rises to the challenge, helped immensely by terrific costuming, each outfit telling its own story as much as any dialogue does.

And there is a lot of dialogue here. Denis and co-writer Christine Angot’s script, loosely adapted from Roland Barthes’s A Lover’s Discourse, takes the shape of a series of conversations between Isabelle and her friends, colleagues, and lovers. These talks are, for the most part, distinctly separated from one another, and there is little to no central plot to speak of, other than Isabelle’s constant dissatisfaction with her love life. There’s a rather sleazy affair with a banker (Xavier Beauvois), which soon gives way to Isabelle rapidly falling in love with a volatile actor (Nicolas Duvauchelle), before that too is done away with in favour of an artists’ retreat which does nothing but infuriate Isabelle.

Let the Sunshine In is gently funny, but not really a comedy, and that the humour lands as well as it does is often more thanks to Binoche than the writing. However, Denis and Angot do a fine, amusing line in understatedly awful men who never know when to shut up and just use Isabelle as a sounding board for their own confused emotions. As a light, breezy drama, it’s consistently entertaining (and never particularly challenging), only faltering at the very end in an annoyingly self-indulgent final scene featuring Gerard Depardieu cameo-ing as a fortune-telling therapist.

It’s not enough to ruin what’s come before though, which is an easy, generally feel-good watch that, with a lean running time, never outstays its welcome. Let the Sunshine In is a far cry from Beau Travail or White Material, and fans of more major-key Denis will still have to wait until High Life for that fix, but, as a far as ‘auteur taking it easy’ films go, this is one of the more enjoyable.