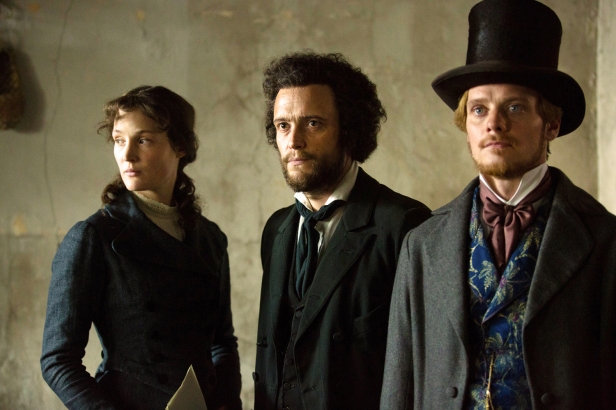 Almost exactly 200 years to the day after Karl Marx’s birth (5 May 1818), his breezy biopic The Young Karl Marx hit UK cinemas (4 May 2018). It’s well timed not only for this date match, but also for arriving at a moment in which socialist ideals have hit the mainstream in British politics, especially amongst young people. It’s these ideals that Raoul Peck (director of the fascinating James Baldwin documentary I Am Not Your Negro) seems most comfortable with. His film focuses on philosophical and semantic minutiae ahead of emotion, and while this makes it an enlightening history lesson, it does also mean that it’s often very dry.

Kicking off in Prussia in 1843, The Young Karl Marx follows Marx (August Diehl) and Friedrich Engels (Stefan Konarske) as they become friends and start their journey to the publishing of the Communist Manifesto in 1848. As his writings gain infamy, Marx and his equally revolutionary wife Jenny (Vicky Krieps, of Phantom Thread fame) are buffeted between European nations, exiled by the Germans and the French, living often in bleak poverty, sustained only by occasional donations from Engels. Meanwhile, when not palling around with Marx, Engels weaves himself into the proletariat struggle in Manchester.

We know how this story ends, and that Marx and Engels will soon become some of the most important writers in human history, so Peck and writer Pascal Bonitzer instead hone in on the small details. Very few films would have the guts to make their grand third act climax the writing and delivering of a retort to a philosophy book, but that’s mostly for good reason. The Young Karl Marx is not exactly exciting. It’s acted well, and the soundtrack is great, keeping the more academic scenes ticking along, but you end up wishing there was more of Marx and Engels getting drunk together, and fewer shouting matches about incomprehensible semantic disagreements.

This sort of story can be told with wit, verve, and great lashings of humour – just look at the Rory Kinnear-starring stage show Young Marx – but that obviously isn’t really what Peck is interested in or comfortable with. It’s admirable that he stuck so close to an intellectually rigorous vision for this biopic, as is the fact that his script flits effortlessly between German, French, and English. Yet, unless you’re already keenly interested in the subject matter, there’s not enough else here to make it a film to easily recommend.

One thought on “The Young Karl Marx”