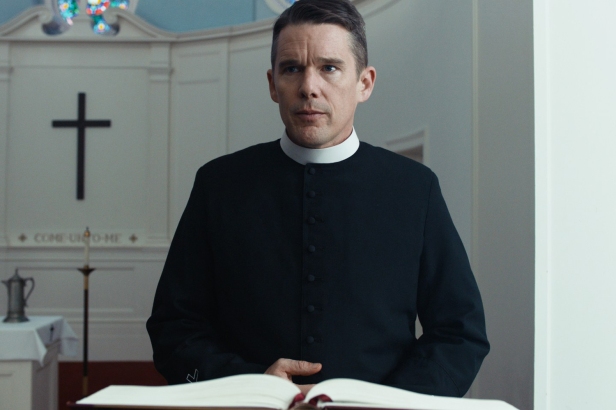 There’s a sickness at the heart of Paul Schrader’s First Reformed. From man-made pollution of the environment to the creeping cancer in the stomach of its hero, this tale of a devout man’s descent into total crisis balances its spirituality with very real, tangible darkness, anchored by an introspective and intensely compelling central performance from Ethan Hawke. Schrader, no stranger to men of purpose going over the edge, has delivered a deliberately divisive study of faith and big business, and the uniquely American intertwining of the two. It’s a fascinating experiment that doesn’t shy away from weirdness or sincere religiosity.

Hawke plays Reverend Toller, a priest in charge of the small First Reformed church in rural New York state. He’s in bad shape, both spiritually and physically, a crisis of faith coinciding with declining health that has him pissing blood and retching well into the night. He feels purposeless – moved to keep a journal documenting his drab days simply as something to keep himself busy – until he’s asked by one of his congregation, Mary (Amanda Seyfried), to make a home visit. Her husband Michael (Philip Ettinger), a militant eco-activist, is suffering from depression as the birth of their first child approaches, and it only takes one meeting with him to spark new life into Toller.

Hawke plays the scene brilliantly, only letting through the slightest hints of the clearly overpowering thrill and fear Toller feels as he discusses the future with Michael. He’s finally found a true believer in a town with a declining church-going population and a megachurch at the centre run by a well-meaning, but essentially corporately-owned, pastor (Cedric Kyles). Toller can’t help but take up the cause, even after he discovers a bomb vest in Michael’s garage. First Reformed is never predictable, the paths taken by its characters following a clear, but slightly heightened, internal logic that unravels in unexpected ways.

Hawke is superb throughout, matching his best Linklater work, keeping the slow, studied first half of the film engaging. Venomous anger starts escaping from Toller in ever more obvious ways, but there are few truly explosive moments. All of this careful character work, generally excellent in its own right, is vital once First Reformed takes a more surreal, less literal approach in the buildup to its stomach-churningly tense finale. Schrader’s script is openly, sincerely Christian, asking questions of what true prayer is and examining the Church’s complicit silence in climate change, when it should task itself with the protection of God’s creations.

Some of these issues can be strange or even impenetrable to those without strong faith, but if you meet First Reformed on its level, then you should have little trouble. Toller’s frequent narration allows you into the headspace of this committed man of God and the town’s antagonistic business interests, impolitely asking Toller to keep politics out of his sermons, make for effective villains. Some scenes, particularly a cosmic epiphany or the very open-to-interpretation final shot, might prove baffling or frustrating, but I found them intriguing and moving, with a thrillingly rebellious undercurrent.

Maintaining a boxed in aspect ratio from start to finish, Schrader and DOP Alexander Dynan find a way to make every shot both intimate and alienating. The smaller picture makes the gulf between Toller and his parishioners seem wider, every meeting informed by a physical distance that takes up most of the centre of the screen. Toller keeps an invisible threshold around his person, and it’s only Mary that crosses it without him feeling that a great offense has been made. Schrader also has an uncanny eye for the grotesque – there are obvious shocking moments of suicide and self-flagellation, but few shots this year have proved as disconcerting as a gooey glug of Pepto Bismol expanding in a glass of bourbon like a fluorescent pink tumour.

This moment’s unsettling power is amplified by the low, droning score that only kicks in about halfway through the film, as Toller’s internal darkness starts to inform more and more of his actions. It’s yet another example of the supreme confidence and control with which First Reformed is made, an uncompromising vision from an auteur that doesn’t need to be liked, but deserves to be seen and discussed.

Written and Directed by Paul Schrader