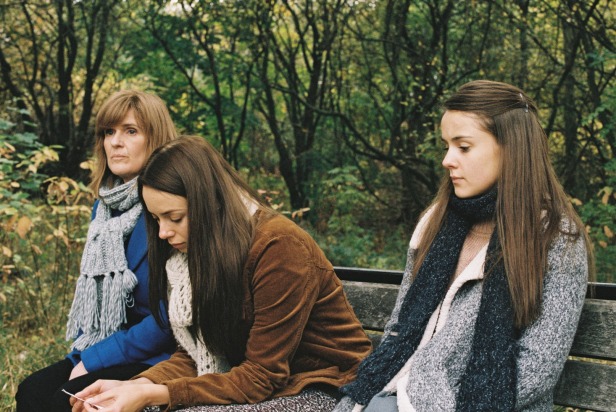 From the very first shot, Apostasy lets you know that you’re in for a deeply spiritual, internal film. Its opening scene takes place within the mind of a committed young Jehovah’s Witness during one of her many prayers, and the scope of Daniel Kokotajlo’s ridiculously assured debut film hardly widens from there. Apostasy is a tiny and very specific film, made universally moving by the lived experience of its writer-director (a former Witness himself), highly accomplished filmmaking, and a trio of quietly tremendous performances at its heart. Its even-handed approach is unlikely to convince Witness sceptics (including me) that the organisation is anything other than a child-endangering cult, but in avoiding harshness and histrionics, it slowly builds an impressive power all its own.

Kokotajlo tells the story of a small family unit in crisis, as older sister Luisa (Sacha Parkinson) is shunned by her local Witness chapter after she gets pregnant by a ‘worldly’ boy she met at college. Her faithful and kindly sister Alex (Molly Wright) tries to come to terms with Luisa being ‘disfellowshipped’, her beliefs clashing with her familial instincts, while their hardline mother Ivanna (Siobhan Finneran) follows the instructions of the Witness elders without question. This swirl of dysfunction constitutes the entire film, as the family attempt to reconnect but, with painful inevitability, push each other even further away.

Apostasy dedicates its first half almost entirely to Alex’s perspective, and it’s here that the veil is most effectively lifted for non-Witnesses. It is fascinating to see the rituals and hear their apocalyptic beliefs, but still infuriating as Alex, still essentially a brainwashed child, is put in constant danger by her mother’s insistence that she not receive vital transfusions to combat her blood disorder. Alex’s internal conflict is brilliantly portrayed, the frequent trips inside her head never overly stylised and capturing the confusion of a newly free adult entering a world that her all-encompassing religion has simply not prepared her for.

Switching to Luisa and Ivanna’s points of view at around the midway point, Apostasy trades in some of its empathy for more obvious conflict. Finneran is superb, of course, but it’s hard to empathise with her plight when the answer to her problems – save your daughters, ignore the arbitrary rules of the elders – seems so obvious to outsiders. It’s not a problem that the film can really overcome, but Finneran and Parkinson’s scenes together are so charged with infectious regret, confusion, and rage that it doesn’t need to.

Shooting in a boxed in aspect ratio, Kokotajlo clearly takes up the anti-Witness organisation mantle. Not only is their language dizzyingly obvious in its cultishness, but their worldview is blinkered, unable to see outside of the brutal anti-emotion and anti-connection messages that accompanies the vague chatter of a ‘New System’ that will come about when Jesus returns for Armageddon. Had this film been made by a non-Witness, then this could have all been laughable, and though the beliefs are no less alien, the understanding with which they are presented forces you to engage with them sincerely, which is far more disquieting than simple dismissal.

With its simple, drained colour palette and lack of score or soundtrack, there isn’t quite enough on the surface to distinguish Apostasy from any number of other worthy British socio-realist dramas. But dig deeper and you’ll find a film written with confidence and emotion that has managed to cast actors to perfectly match the script. It’s a bold and impressive debut, so deliberately paced that you’ll hardly notice the moments of heartbreak sneaking up on you before they hit you with hammer-like force.

Written and Directed by Daniel Kokotajlo

One thought on “Apostasy”