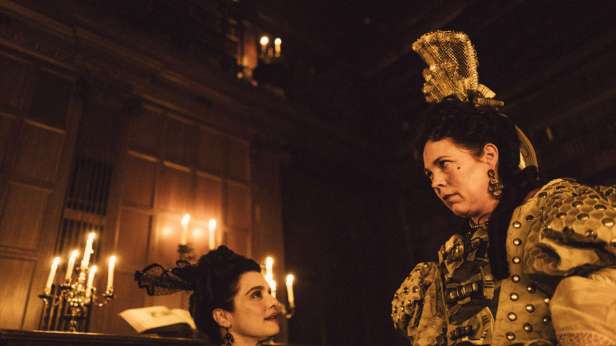 In a time when Britain feels ever more like we’re lumbering back towards a distant past that will spell a worse life for everyone except Jacob Rees-Mogg, it’s fair to wonder if we need another aristocrat-focused costume drama. Well, if that costume drama is by Greek master of black comedy Yorgos Lanthimos, stars three savagely funny women, and cuts the ruling class down to size at every opportunity it gets, then the answer is yes. Luckily, The Favourite is all of these things, a raucous and grotesque upending of its genre.

With no visible strain, Lanthimos transplants his dark view of the world to 1700s England. The gout-ridden and unpredictable Queen Anne (Olivia Colman) sits on the throne, barely able to govern and interested only in the company of her friend and secret lover Lady Marlborough (Rachel Weisz). Into this mix is thrown – quite literally – Abigail Hill (Emma Stone), a formerly landed lady reduced to begging Lady Marlborough, her cousin, for a servant job. Seeing an opportunity in the venal and childlike Anne, Abigail begins working to secure herself a position in the court, a personal struggle against current favourite Marlborough that has an impact on the entire kingdom.

Landing only a year after Lanthimos’s masterpiece, The Killing of a Sacred Deer, The Favourite can seem somewhat conventional by comparison. However, that’s not to say it isn’t still delightfully off-piste and the auteur’s trademark ability to do a tonal 180 without missing a beat is still very much in evidence. Much of this is down to a delicious script from Deborah Davis and Tony McNamara. It’s rare that Lanthimos doesn’t write his own work, but the writing perfectly matches his directorial sensibilities, and is as quotable as any film using 18th Century upper class language could possibly be.

Also central to this success is Olivia Colman. She can spin a scene from hilarious to pathetic to heartbreaking, Anne’s ever-fluctuating level of lucidity rendering her by turns a fearsome and pitiable figure. It’s the cinematic star role she’s deserved for some time now, and goes into it full force, commanding the screen. Emma Stone is almost her equal, with an almost flawless accent and the kind of razor sharp comic timing that initially made her a star. Weisz rounds out the trio, a little more imperceptible than her co-stars but still funny and hugely charismatic. Of the supporting cast, it’s Nicholas Hoult who’s given the most to do as a constantly emasculated foppish Tory, and he’s on delightful, hilarious form.

The tangled web of relationships in the royal court makes for a highly entertaining plot filled with backstabbing and long-game scheming, the power balance between Marlborough and Abigail constantly shifting. With her influence on Anne, Marlborough is the Queen in all but name and a dab hand with a pistol, but Abigail weaponises her tragic backstory and wide eyes to level the playing field. All three lead women are hilarious and malevolent, yet consistently sympathetic too, and it’s all too rare that roles like this come up.

Lanthimos crafts fascinating, disgusting, and very funny images in his depiction of English royalty, from the flame-lit secret passages inside the palace to Anne taking big bites of cake even as she vomits up the green icing. Dignity is in short supply even at the highest offices of the land, with little of the pomp and circumstance that people nostalgically bestow upon the time period, and any film that reminds us that the powerful are just as inept as anyone is sending the right message.

If you need any further proof that The Favourite is a lot of fun, you need only look at the all-time great cast list, which includes both ‘Wanking Man’ and ‘The Fastest Duck in the City’ (a stellar performance from Horatio the Duck). It’s a bawdy, irreverent film that also never loses sight of its stakes and is steeped in real history. Sincere pain grounds its characters even as they take ludicrous actions, but the film never gets bogged down in earnestness. It stumbles a little at the final hurdle, but it’s an absolute blast of a journey to get there.

The Favourite is released in the UK on 4 January 2019