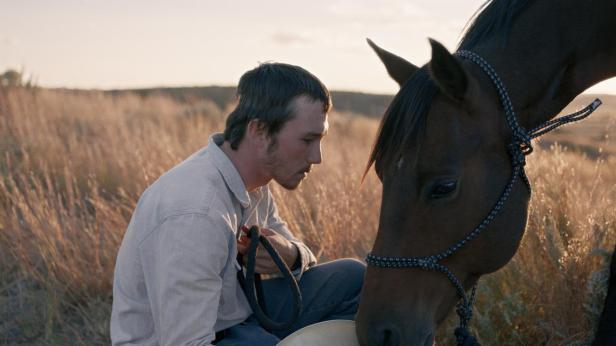 We’ve seen films blur fact and fiction before, but Chloe Zhao’s The Rider takes this docu-drama gimmick and does something profoundly original with it. Casting a South Dakota Sioux cowboy family as, essentially, themselves, this is a sublime scripted drama that draws additional power from its unflagging commitment to empathetic authenticity. Zhao’s film gives us a fascinating insight into an unfamiliar way of life with her non-professional cast, and determines at the same time to deliver a deeply satisfying central story.

Brady Blackburn (Brady Jandreau) is a horse trainer and rodeo rider who we meet fresh out of the hospital following a life-threatening head injury in an accident involving a startled bronco. His slow recovery and return to riding is based on Jandreau’s real life, as is the care Brady takes of his autistic sister Lilly (Lilly Jandreau) and paralyzed friend Lane (Lane Scott). Though you don’t have to be aware of the extent of the reality you’re witnessing to appreciate the film – it’s a really brilliant standalone piece – many moments are elevated by the knowledge that these scenes continue regardless of the cameras.

Brady’s tragedy is that he can’t extend his plentiful kindness and compassion for others to himself. His is a harsh world, and while sentiment and sympathy aren’t exactly forbidden, they’re hardly a priority for the men who are continually telling each other to ‘cowboy up’. Brady’s friends refuse to accept that his injury could actually bring a halt to his riding days, so he pushes himself to the point of vomiting and seizures to impress them. Only his rather deadbeat dad, Wayne (Tim Jandreau), understands the extent of the pain and danger that Brady is now constantly in with a metal plate in his head.

The unpleasant details of Brady’s condition are presented unsparingly, and you flinch with him as he touches a wound or has his right hand involuntarily clench into an unopenable fist. It makes for visceral reactions, and the emotional scenes match the more gruesome or physically distressing ones in impact. Having to take a job at a local supermarket to make ends meet, Brady meets fans of his riding. A lesser film would have given Brady shame and his fans judgement in this encounter, but instead there’s just sincere excitement on each side, a wonderfully moving surprise.

But it’s when Brady is finally healed enough to head back into the fields that The Rider shines its brightest. Jandreau has a genuine gift for horse breaking – it’s his full time job, and he’s one of the very best at it – and so when his work is captured by Zhao’s gently sweeping camera and an understated score, it’s beautiful to watch. An extended sequence in which he tames a wild Arabian colt over the course of a full day is soaringly emotional and a joy to watch, movie magic in its purest form. The Rider puts you right on the plains, with the wind at your back and reins in your hands, phenomenal direction from Zhao.

Not only is she technically superb, but Zhao’s ability to get the performances she does from her cast – none of whom you would guess were first time actors – is pretty much miraculous. They’re naturalistic and nuanced and fit right in to the glorious vistas and close-ups captured by DOP Joshua James Richards, who shot the similarly beautiful rural tale God’s Own Country earlier this year.

The Rider tells a tiny story, making no attempts at grandiosity, building to a quietly but profoundly touching ending. It’s a completely original piece of filmmaking by an auteur who deserves to be a superstar. Zhao’s is an eye-opening, heart-warming vision that should be seen by as many people as possible.

Written and Directed by Chloe Zhao