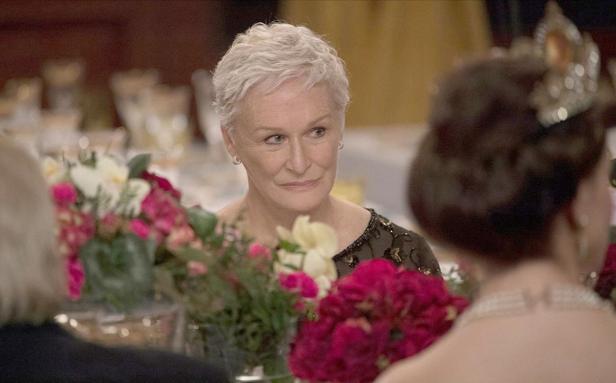 If there’s another film in 2018 that belongs more to one single actor than The Wife belongs to Glenn Close, it would have to be a filmed one person show. Yes, this adaptation of Meg Wolitzer’s novel also stars an on-form Jonathan Pryce, but from the opening title card to the final shot, for better and worse, it’s Close’s performance that carries the whole endeavour. She makes a strong play for the Best Actress Oscar that has long been owed to her and she and Pryce bring a cinematic pizzazz to a film that could otherwise quite easily be a play.

Venerated author Joe Castleman (Pryce) is awoken very early one morning by a phone call telling him he’s won the 1992 Nobel Prize for Literature. Accompanied by his wife Joan (Close) and petulant, insecure son David (Max Irons), he heads to Stockholm for the clebrations and ceremonies. From the off, we can tell something is wrong, Joan immediately more distant and uncomfortable, and it’s not long before the prying questions of biographer Nathaniel Bone (Christian Slater) turn long-simmering resentments into a powder keg. Joan’s own literary aspirations had been stymied by systemic sexism, and it slowly transpires that she may have more to do with her husband’s success than he does.

Close is a towering presence in the role, Jane Anderson’s script focused on giving her as much opportunity to shine as possible. She gets years of history across in single glances and does a superb line in barely repressed disdain or humiliation. Pryce and Slater are also great, and both share good chemistry with Close (Joan and Joe’s fights are particularly well handled), but are inevitably outshone. In a thankless role, though, Max Irons fails to do much of interest and the flashbacks to Joan and Joe’s early courtship feel more like interruptions than necessary world building.

Bjorn Runge’s direction is pretty workmanlike in what is easily the Swedish filmmaker’s most high-profile international release to date. When Close and Pryce are tearing up the screen, this is fine, but there are points where The Wife is resolutely uncinematic. Performances aside, the story isn’t quite compelling enough to make up for this, and there are moments where your interest wanes, especially when we’re back in the ‘50s with Harry Lloyd and newcomer Annie Starke as the younger Castlemans. They’re able actors, but so much less engaging than Close and Pryce.

Glenn Close is indeed extraordinary in The Wife, but this year we’ve seen performances of a similar calibre in films like Cold War and Vox Lux, which matched their star power with masterful scripts and powerful filmmaking, whereas Runge’s film is content to sit back and just watch Close work. It makes for an impressively acted piece that never quite demands to be seen on the big screen.