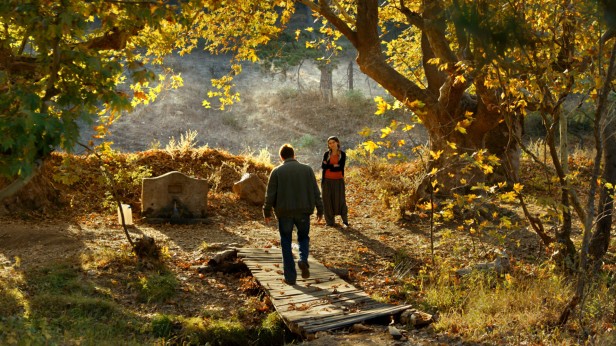 The Wild Pear Tree is not a film one can casually watch or recommend. A dialogue-heavy, more than three hour journey through countless extended conversations about religion, literature, and misanthropy, it’s a daunting prospect, and one that isn’t entirely worth the effort. Nuri Bilge Ceylan films are always wordy, lengthy affairs, and if you’re already a fan, then I’m sure you’ll enjoy The Wild Pear Tree, but it’s unlikely to win any new converts.

Ceylan’s first shot is of recent graduate Sinan Karasu (Dogu Demirkol), as he finishes a coffee before boarding the bus back to his home town. From there on, we never leave Sinan’s side as he reunites with his family, old friends, and local imam. There’s barely any plot to speak of – Sinan is trying to get his first book published, but this is hardly urgent – with most of the time instead taken up by Sinan’s antagonistic relationship with his father Idris (Murat Cemcir) and mother Asuman (Bennu Yildirimlar). It’s a deep study of parental-child relationships, particularly between a father and a son – both men are frustrated dreamers and disappointed in one another in their own ways.

A fundamental problem, though, is in just how unlikeable every character is, with the exception of Sinan’s community-minded grandparents. Asuman is bitter and reactionary, Idris is a debt-ridden gambling addict and chronic loser, and, most damaging of all, Sinan is simply an all around arse. He’s pretentious and self-regarding, openly sexist, and cruel to animals, with a deeply boring faux-nihilistic worldview that most people get over by about their second year of university. To spend three hours in his company is a pain, and attempts at profundity got blocked by the cynical filter of the lead character. The best scenes – like a fraught bus station confrontation or a real writer giving Sinan a dressing down – actually attack these characters’ worldviews, but they’re too infrequent.

Everything is shot with a bold confidence, and there’s a lot of lyrical dialogue when Sinan runs into one-scene characters that have a habit of being far more interesting than the lead trio. There’s a high-school sweetheart whose world-weariness rings far truer than Sinan’s and a new-school young imam with a deeper and more interesting understanding of philosophy. Ultimately, though it does have its qualities, it’s simply too much work to meet The Wild Pear Tree at its level, especially when you could watch both Up and Inside Out within the time it demands.