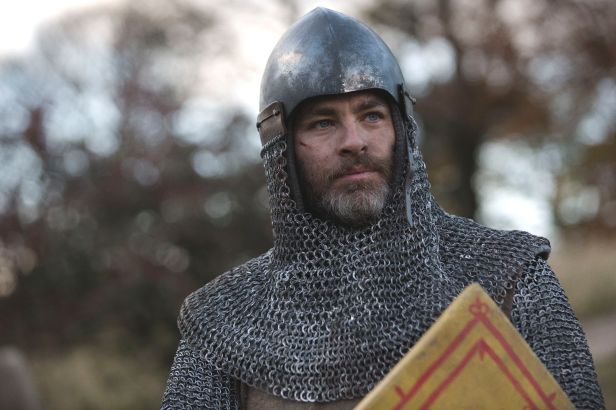 In a rousing pre-battle speech, Robert the Bruce (Chris Pine) exclaims “I do not care why you fight, only that you fight”. It’s a sentiment you’ll find yourself agreeing with about Outlaw King as a whole, a film that struggles with dialogue and character but absolutely excels when everyone shuts up and gets down to their muddy, bloody business. Twenty minutes shorter now than it was when it first premiered in Toronto, the cuts have clearly been for the better – this is a flawed but exciting and entertaining film that would have been bordering on the boring had it been any longer.

It’s the early 1300s in Scotland and England appears to have crushed their attempt at independence. Castles are occupied, the King (Stephen Dillane) has subjugated the noble lords, and William Wallace appears only as a dismembered corpse. Where Braveheart lionised Wallace’s legend and ultimate failure though, Outlaw King is a story of eventual success. Robert, through cunning and an early example of guerrilla warfare, repelled the English from Scotland, and David Mackenzie’s film sets out the how and why. It’s hardly a surprising story – we have an evil snivelling English prince (Billy Howle) to hiss at and an against all odds final battle – but it feels a lot more authentic than its fun but utterly ahistorical spiritual predecessor.

Mackenzie’s last film, Hell or High Water was buoyed by its Taylor Sheridan script, but Outlaw King lacks a similarly distinctive or equally skilled authorial voice (there are five credited writers). Dialogue is rather generic and there are two scenes in which someone whispers a vital piece of information and then instantly dies of old age, both of which are unintentionally rather funny. Character traits are similarly thin, and the acting is patchy. Pine is dashing and his Scottish accent is rather better than expected, but his role has a bit too much capital-S Staring, while Aaron Taylor-Johnson is far too broad as Robert’s right hand man.

Florence Pugh, as Scotland’s queen Elizabeth de Burgh, continues to impress after her sterling breakout year in 2017, but the real star of the show is Scotland itself. The landscapes have a breathtaking untamed beauty and, as Mackenzie’s camera swings over the vistas you’re fleetingly reminded of The Revenant’s stunning scenery, which is a great thing, but could be lost on Outlaw King’s Netflix release. Barry Ackroyd’s cinematography is similarly accomplished when he gets into the centre of battle.

It’s these action sequences that truly make the film. Mackenzie earns his stylistic stripes in the first scene with an extended tracking shot through a royal oath-swearing, but the battles are on a higher level. The sheer amount of work that must have gone into them is staggering and the effort more than pays off. You really feel as if you’ve entered the fray, and Mackenzie’s team and the cast not only get across the violence and fear of war but also the physical exhaustion. No sword swing is without weight, no kill without an overwhelming exertion.

You can see medieval battles of a similar calibre in shows like The Last Kingdom, Vikings, and of course Game of Thrones, and Outlaw King lacks the sharp writing of the best of these series, but that doesn’t mean it’s not worth watching. It’s never boring and really does feel like history unfolding before your eyes. An old-fashioned underdog war story, Outlaw King is singularly focused on the war at the expense of the story, an epic undertaking that pays great dividends as long as no one’s talking.