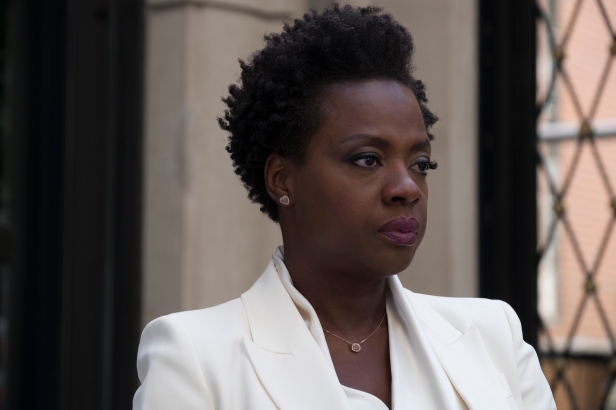 Serious prestige filmmakers moving into more action-packed and obviously commercial territory is hardly unheard of. Yet, even taking this into account, it would have been hard to predict that Steve McQueen, perhaps the finest auteur to emerge in the last decade, would follow up 12 Years a Slave with an adaptation of an ‘80s ITV thriller – Lynda La Plante’s Widows. Thankfully, he makes the transition with hardly a wobble, delivering a jolt of pure entertainment with social and political messages simmering away in the background. Widows opened the 2018 London Film Festival with a mighty bang, one of the most exciting films of this awards season.

After the fiery deaths of their husbands during a failed robbery, four otherwise unconnected widows are forced to band together to pull off a major job to pay off their debts to a gang of mobsters looking to get into politics. Leading this makeshift crew is Veronica (Viola Davis), whose husband Harry (Liam Neeson) left her the plans to his final job, said to be worth five million dollars. The debt aside, each woman has their own reason for needing the money – Alice (Elizabeth Debicki) is being encouraged into prostitution by her own mother, Linda’s (Michelle Rodriguez) losing her store, and Belle (Cynthia Erivo) wants the financial freedom to spend more time with her daughter.

Naturally this is, first and foremost, Viola Davis’s film. Not only is Veronica a clear leader as a character, but you could hardly think of an actor better suited to leading a heist, her forceful presence more than enough to convince you that the rest of the women would follow her into such a dangerous situation. Yet, she never overshadows anyone in this incredible ensemble. McQueen gives every performance and character value, while also having the confidence to burn through Liam Neeson and Jon Bernthal inside the first 10 minutes.

Debicki is really terrific, both brittle and steely, and a subplot of her acting as an escort for a wealthy (and useful) architectural planner is, refreshingly, not nearly as skeevy as it might have been. Rodriguez might have the least interesting role, but brings a fire to it, and Erivo is having a simply incredible first year in film with this and Bad Times at the El Royale. Outside of the widows, it’s Daniel Kaluuya who makes the biggest impression. As ice-cold enforcer Jatemme, supporting his brother Jamal’s (Brian Tyree Henry) political ambitions, he’s given only a few scenes, but is absolutely gripping, leaving a trail of terror and humiliation in his wake.

McQueen and Gillian Flynn’s script makes great use of its source material, embracing its soapy, pulpy origins without descending into winking irony or anything other than total sincerity. There are twists and turns befitting a slightly campy TV drama, always exciting and surprising and leaving plenty of room for an intelligent study of corruption and power. The modern Chicago setting allows Widows to explore themes of unfair political dynasties and racist police brutality, these factors never just set dressing but informing the tone and the story throughout.

Power imbalances, whether caused through class, gender, or racial disparity, are at the heart of McQueen’s story, and he and DOP Sean Bobbitt find consistently interesting ways to get this across visually. They also manage to get a stunning sense of place across, never more so than in a daring long take that follows slimy politician Jack Mulligan (Colin Farrell) from a rally in a poor neighbourhood into his car to drive to his home in a far more upscale area. The geography is effectively conveyed throughout, adding an extra layer of reality, especially useful in the final heist.

This is pulled off with all the confidence and swagger one would expect from McQueen, full of faultless choreography and rattling sound design. Hans Zimmer’s low, ominous score contributes to the mood without becoming intrusive, and Widows retains its capacity to shock all the way to its conclusion. It might not quite match the searing, lingering power of McQueen’s previous work, but Widows is an energetic machine of thrills, a top-tier muscular crime drama that clears every bar for powerful, nuanced female representation.