Cinematically at least, 2018 was an absolute blinder. We got Oscar frontrunners that actually deserved their unanimous praise, some of the best superhero movies of all time, freaky and uncompromising cult movies, and two pitch-perfect Natalie Portman performances. So strong was this year’s crop, that even movies as wonderful as Mission Impossible Fallout, The Miseducation of Cameron Post, and Suspiria just about missed out on places in my top 10. 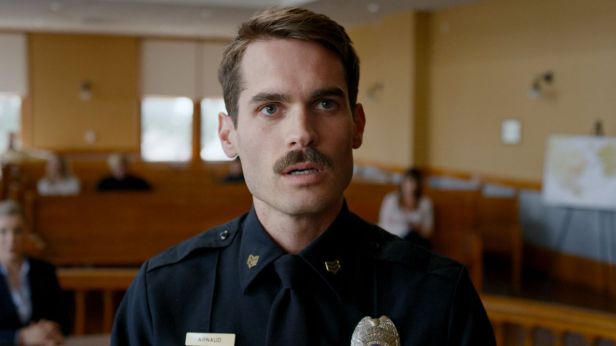 A triumph of both indie moviemaking and indie distribution, Jim Cummings’s adaptation of his short film into a full length feature showed the sheer power of filmmaking passion. Starring, writing, and directing, he crafted Thunder Road into a hugely funny and heartwarming tale of a man in crisis and built a world that feels not only lived in, but bathed with the warmth of that life, an incredibly moving kindness emanating from every scene.

I saw A Star Is Born on the same day as I saw Peterloo and The Ballad of Buster Scruggs, and if you had told me that morning that the Bradley Cooper film would outshine both a Mike Leigh and a Coen Brothers offering, I would have found it hard to believe. But outshine them it did, with excellent directing, irresistible music, and phenomenal performances. Cooper is as good as he’s ever been and Lady Gaga is spellbinding, moving from pop star to movie star without a wobble. Now, time to listen to ‘Shallow’ for the 40th time this week…

The only film on this list that I would struggle to revisit, Dogman was about as uncomfortably tense an experience as I had in a cinema in 2018. Always building to ever worse outcomes for its protagonist, Garrone’s return to grubby crime drama shows a master at work as he ratchets up the anxiety to unbearable levels before a heart-stopping finale. The human cast are exceptional and their canine counterparts are perhaps even better, every pooch from a shivering chihuahua to a giant and unimpressed great dane getting a chance to shine. 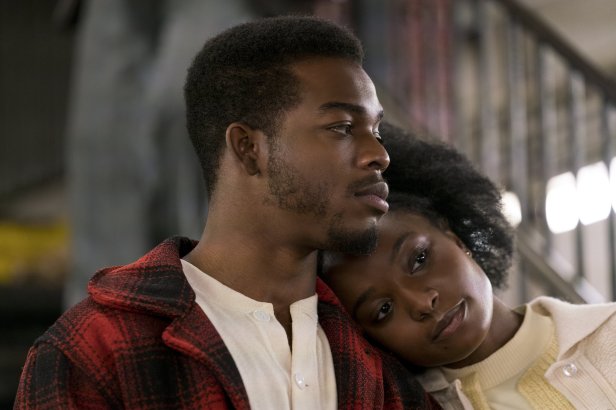 If Beale Street Could Talk is almost certain to win Best Supporting Actress on Oscar night thank’s to Regina King’s sterling efforts, but in a just world, both Brian Tyree Henry and costume designer Caroline Eselin would be shoo-ins for awards glory too. Henry, who has had a mind-bogglingly productive 2018, gives the best performance in this entire wonderful ensemble with just one scene, a laser-guided missile of hurt, fear, and fury that will never leave you. Meanwhile, no matter how pretty the costume drama dresses are, no film this year uses clothing to tell a story like Beale Street, and the gorgeous outfits are the visual highlight of a beautiful film positively drenched in colour. Moonlight was a rare masterpiece and, with Beale Street, Barry Jenkins is proving himself one of the definitive filmmakers of his generation.

First and foremost a genuine miracle of camerawork, Cold War‘s monochrome beauty is as immersive and luscious as the saturated world of Beale Street. In every frame you can feel the film reaching out to pull you deeper and deeper into its love story, every shot perfectly composed with a surreal level of skill. An epic that unfolds in double time, taking in 20 years and a whole continent in less than 90 minutes (including credits), Cold War finds a radical power in its otherwise traditional storytelling, capturing classic filmic moments as if Pawlikowski had just invented them. Joanna Kulig is a force of nature in the lead, a tornado of energy and charisma that’s impossible to look away from. 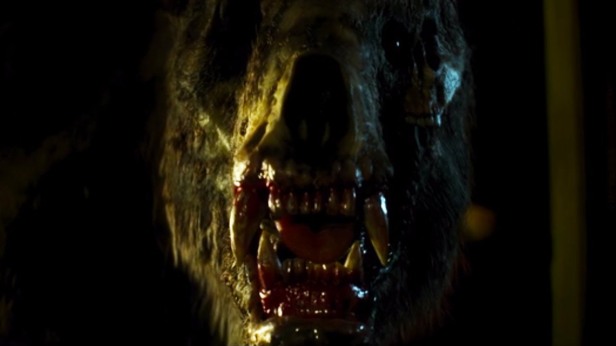 A film so magnificent that it’s both terrifying and awe-inspiring even on a small laptop screen, Annihilation‘s Netflix release in the UK was initially met with scorn, but it hardly put a dent in the brilliance of Garland’s ambitious, intellectual sci-fi. It probably got more eyes on it in its first week of its release on the streaming service than it would have done for an entire cinematic run, and the more people that see it, the better. It’s a studio film that takes real risks, especially in its introspective, allegorical study of both the ravaging effects of cancer and the human need to self-destruct, which culminates in a kind of surreal, quasi-religious first alien contact that would have Kubrick jealous. Everything is perfectly designed, from crystal trees to the hellish monster bear, one of the scariest creatures I’ve ever seen in a film. Grotesque and beautiful in equal measure, Annihilation would no doubt have benefited from a big screen showing, but that doesn’t stop it from being an absolute must-see.

It’s the greatest comic book movie ever made. The absurdly ambitious endgame to 10 years of careful universe building, Infinity War lived up to the hype and then some. From the opening Asgardian massacre to the devastating and shocking aftermath of Thanos’s snap, the Russos somehow remain in total tonal control of this sprawling, superpowered epic, keeping the story coherent and balanced. Bold plot moves with real, permanent ramifications set the stakes higher than they’ve ever been in a Marvel movie in the first scene alone, and even if the infamous climactic dusting is highly unlikely to be permanent, it makes for a breathtaking ending to this chapter. Thanos makes for as compelling a villain as one could possibly want from a blockbuster, and so the heroes have to raise their game too. Everyone gets at least one moment to really shine, but Chris Hemsworth’s Thor steals the show. If there’s a more exciting single sequence of cinema than the God of Thunder arriving at the battle in Wakanda this year, I haven’t seen it.

I’m still not entirely convinced that Mandy was actually made on this planet, or even in this dimension. Panos Cosmatos’s visionary horror/thriller/black comedy is so unlike anything else released this year that at times it can be difficult to know exactly what it is you are seeing. Let yourself be drawn into its world, though, and it’s an overwhelming mix of heady thrills and magnificent gore. Nic Cage gives his best performance since his almost equally demonic turn in Werner Herzog’s Bad Lieutenant in 2010 and when a true all-time Cage freakout is made to look like the saner aspects of a film, you know you’ve got something special. The atmosphere is so thick it practically drips off the cinema walls, sickly greens and devilish reds filling the ever-present fog as the thrilling, self-aware action rages. On a bittersweet note, Mandy features the last completed soundtrack from the late master composer Johann Johannsson, and it’s one of the Icelandic music legend’s very best – I was listening to ‘Children of the New Dawn’ every day for weeks after I saw the film. 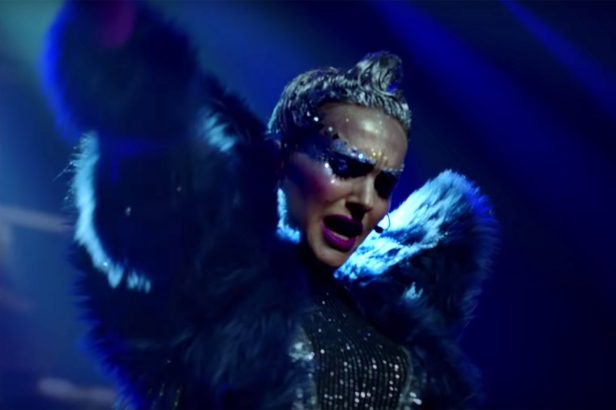 In a year chock-full of brilliant stories about music stars, none aimed as high as Vox Lux, the absurdly confident second film from young director Brady Corbet, challenging Damien Chazelle as the great American filmmaker of his generation. Not so much a sibling to A Star Is Born as a fucked up cousin, Vox Lux doesn’t settle for being just a great pop star movie (though it is certainly that), instead setting its sights on a target far more vast and daunting. In the life of its lead character, Corbet’s razor sharp and profoundly insightful script finds a discomforting surrogate for the entire story of 21st Century America. Born of incomprehensible violence into a glamorous world and desperate to hide her anxiety and loneliness behind pop-culture masks, Celeste Montgomery’s life story is immediately gripping at the literal level while possessing an air of genuine historical importance. Corbet never sacrifices emotion for analysis, instead weaving between the two with Willem Dafoe’s brilliantly sinister omniscient narration. As a showcase for Corbet’s technical skill, Vox Lux is extraordinary, as is Natalie Portman’s performance. A second Oscar would, ideally, be a mere technicality (especially as Portman also fronted Annihilation), but Vox Lux is too difficult a film to make much headway into the awards conversation, and all the more memorable and affecting for it.

Adapting a 10 page short story into a two and a half hour movie is one thing. Having that adaptation not only earn every second of those 150 minutes, but also hold enough potential that it would remain thrilling even if it ran at 10 hours? That’s something else entirely, and the mark of one of the all-time great mystery films. Much like Vox Lux, Burning has the smarts and confidence to tackle, in depth, the unbearable isolation and alienation of the modern world – a subject too heavy or sad for most films to deal with. Burning lets these feeling metastasise within a cage of toxic, angry masculinity and class conflict in an absolutely brutal character study of two dissatisfied men and the unlucky woman that comes between them. As the central mystery deepens, it engulfs you entirely, through expert writing and pacing as well as a career-best performance from Steven Yeun as 2018’s scariest villain. There might not be any superheroes, demons, or higher lifeforms from space in Burning, but Chang-dong still crafts a world just out of step with our own, a surreal sense of insecurity rising and rising until the ending, which is both inevitable and a shocking gut-punch. No film this year has better captured the bizarre misery and unreality that has absolutely coated the real world in 2018, and Burning does so while remembering to thrill and fascinate from start to finish.