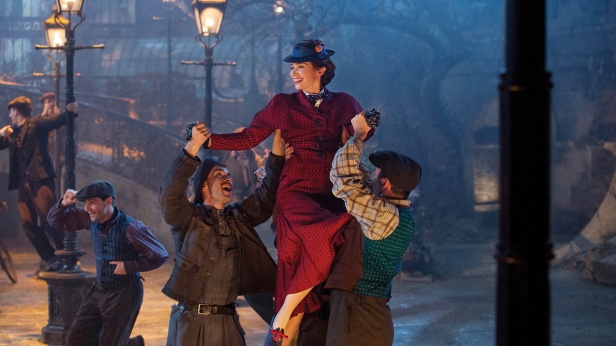 When Disney first announced and started setting about live-action remaking/rebooting/sequel-ing their extensive back catalogue of beloved classics, there was understandable cynicism. After all, these films are guaranteed to make stupid money without, presumably, having to draw in many original ideas. Yet, with the spectacular Jungle Book and joyous Beauty and the Beast, the studio proved they were still putting heart and soul into their most kid-friendly fare, and that’s more the case than ever with Mary Poppins Returns, the best return to old-school Disney yet. It’s an absolute stunner, light as a feather yet with a cast that grounds it in a deeply affecting emotional reality.

Picking up around 30 years after the eponymous magical nanny first took care of the Banks family, Rob Marshall’s very belated sequel finds us in Depression-era London, where the grown up, now widower, Michael Banks (Ben Whishaw) is facing foreclosure on the family home. His sister Jane (Emily Mortimer) and his three children do their best to help, but Michael is floundering in a harsh mix of financial instability and grief. Enter, of course, Mary Poppins (Emily Blunt), who returns to the Banks family in their time of need having not aged a day since her last visit.

She brings magic back into their world instantly, flying in through storm clouds with her talking umbrella and bottomless bag. She leads the children on adventures through bathtubs that contain whole oceans and, in one showstopping extended set-piece, into a china bowl that has an entire world living within it. This visit is one of many technical triumphs that director Rob Marshall conjures, a technicolour dreamscape that in which the laws of physics are rewritten on the fly to allow for the best possible song and dance number for Blunt to strut her stuff in.

Hugely boosting these numbers is the presence of Hamilton mastermind Lin-Manuel Miranda (fondly aping Dick Van Dyke’s infamous cock-er-ney accent) as lamplighter Jack. He lights up the screen even during a ridiculously impressive dance shot mainly in silhouette. David Magee’s script doesn’t skimp on the songs, and though there isn’t the kind of pivotal ballad that so helped ingrain Frozen, Moana, and the like in the public consciousness, they’re all toe-tappingly catchy and very, very fun. Marshall keeps this energetic choreography alive even when the music stops, every frame of Mary Poppins Returns full of movement that’s impossible to look away from.

As great as Blunt and Miranda are – and I haven’t even had the chance to mention Colin Firth’s hissable banker villain, Meryl Streep’s bouncy cameo, or Dick Van Dyke’s magical return – this is absolutely Ben Whishaw’s film. From the moment he tearily sighs through his first song, he brings the exact right note of sadness and melancholy that stops the rest of the film – which contains quite a lot more than just one spoonful of sugar – from being too saccharine. The scene in which he finally allows his three kind and understanding children in on just a bit of his grief over their collective bereavement is a guaranteed tear-jerker, a perfectly acted moment of familial togetherness.

These child actors – Pixie Davis, Nathanael Saleh, and Joel Dawson – are amazing finds. Not only can they help hold up Mary Poppins Returns’s most openly emotional scene, they also all adapt tremendously well to whatever complex choreography Marshall throws their way. Their awe at Mary Poppins’s various miracles permeates through the whole film, but they’re also allowed to be clever and logical. Michael’s situation has made them all grow up a little too fast, especially in their amusingly professional interactions with their harried maid Ellen (Julie Walters, filling a similar role to the one she has in that other perfect family franchise starring Ben Whishaw).

Following suit with the 1964 original, Marshall mixes cartoon and live action with visible excitement, never too concerned with ‘realism’ and finding just the right balance between believable and lovably absurd. It’s a technique that once again adds a heaping dose of extra whimsy to proceedings which, when done as imaginatively as it is here, is a simply fantastic thing. Mary Poppins Returns is an almost-guaranteed smash-hit and it richly deserves to be one. It’ll leave you walking on air.

Mary Poppins Returns releases in the UK on 21 December 2018