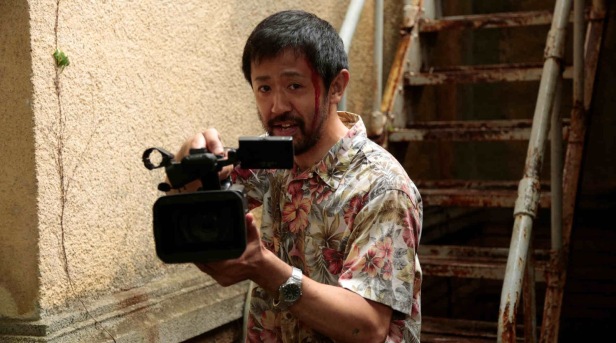 After years of saturation of the genre, you might think that zombie films cannot possibly be offering anything new in 2019. For the most part, you’d be right, but it’s to the great credit of Japanese filmmaker Shinichiro Ueda that One Cut of the Dead ends up as an exception to this rule. An inventive and technically showy horror comedy, it uses self-awareness and a love of filmmaking to its advantage to craft a genuinely memorable (if a little gimmicky) undead story.

Upon its first screenings, One Cut of the Dead made waves with its first 40 minutes. Whilst filming a zombie movie, a psychotic hack director finds his set overrun by the real living dead and refuses to let his cameraman cut, and the subsequent chaos and carnage is captured in one incredible extended shot. The whole thing is absolutely seamless, lurching from set-piece to set-piece as the incredibly athletic camera attempts to keep track of all the fear and violence. If it sounds a little like One Cut of the Dead is showing off for the sake of it, it actually is. After the first 40 minutes, the credits roll, revealing the one-take film is within the more conventional actual film, and we cut back to see how the in-universe crew pulled off the feat.

It’s a meta twist that takes a little while to get used to, especially as the tone flips from semi-serious horror to sitcom silliness, but once it clicks, the latter half is a lot of fun. It’s an ode to the creative problem solving that defines low-budget filmmaking, and its many revelations cleverly explain away some of the less explicable moments from the initial 40 minutes. What might seem like mistakes on first viewing turn out to be hastily solved crises and the frantic panic and wild-eyed relief of the crew is enjoyably infectious.

Takayuki Hamatsu makes for a gently compelling lead as the put-upon director, and pretty much the entire cast is very likable, even as their flaws and foibles stall the production. The central conceit might prove frustrating or too self-consciously clever for some, but if you go with it, then it’s an entertaining ride with plenty of deeply rewarding moments.

Written and Directed by Shinichiro Ueda