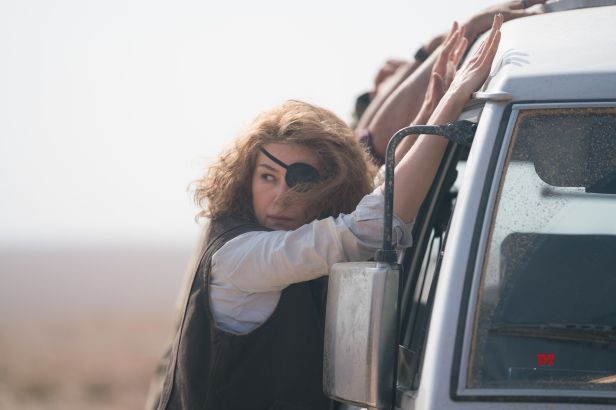 Just a few days after the London Film Festival showcased a weirdly blatant fictionalisation of Marie Colvin in the painfully sub-par Girls of the Sun, the biopic of the real thing premiered and, again, was painfully sub-par. Why making a good movie out of an eyepatch-sporting reporter who gave a voice to the voiceless in the world’s most dangerous warzones has proved so difficult is beyond me, but A Private War is a clumsy mess, with glaring flaws in almost every aspect of this production. Marie Colvin (here played by Rosamund Pike) is a towering, fascinating figure, but Matthew Heineman’s take on her story is pretty far from doing her justice.

Structured around some of her most important, well-known reports, A Private War has an incredibly morbid and unnecessary countdown in its title cards to Colvin’s eventual death at the hands of Assad’s army in Homs in 2012. We start in 2001 Sri Lanka, as Marie covers the uprising by the Tamil Tigers and receives the injury that costs her left eye before spending most of the middle of the film flitting between London and Iraq/Afghanistan. Finally, we reach Syria, where Colvin’s decision to stay for a week longer than she needs to will prove fateful.

As a study of war addiction, A Private War could have been an insight into a mindset that is utterly alien to most, but Arash Amel’s unimaginative script brings nothing new to the table, and gets the performances it deserves. Pike is mediocre at best in the lead, and you can quite often see the cogs turning as she never settles into the role. One scene in which Marie has a drunken argument with her editor Sean Ryan (Tom Hollander, completely wasted) is a nightmare of overacting, Marie’s intoxication showcased through almost laughable wobbly gestures and pronounced slurring.

Heineman’s direction is similarly jumbled. His roving camera is more confusing than immersively disorienting. You’re not sure what’s going on in the heat of battle, which makes sense, but this same incomprehensibility stretches into quiet conversation scenes. This is exacerbated by an incredibly muddy sound mix that makes a heavily accented Jamie Dornan in particular (as Marie’s photographer Paul Conroy) impossible to understand. There’s also a lot of uncomfortably gratuitous nudity for Pike, which is never earned by the story and ends up more sleazy than sexy. A brilliant documentarian, Heineman hasn’t been able to transfer those skills to drama, A Private War skating by solely on the residual power of its subject matter.