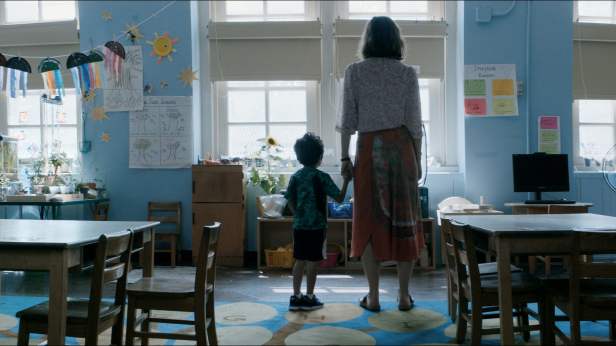 Films like Sara Colangelo’s The Kindergarten Teacher are rare. It has an incredibly rich and complex female role at its heart who happens to be both the film’s protagonist and, from any perspective other than her own, absolutely the villain of the piece. Adapted from an original Israeli film by Nadav Lapid, it’s an ethically thorny proposition with a debate-sparking premise that confidently follows through on its central ideas, even as they take the story to dark, uncomfortable places. With its rather murky morals, it could prove frustrating or outright offputting to some, but it stays darkly compelling even as you lose sympathy for its lead character.

Maggie Gyllenhaal plays Lisa Spinelli, a committed but bored kindergarten teacher who livens up her existence with a weekly poetry class. She’s not a natural creative, and is told outright by her teacher (Gael Garcia Bernal) that she’s a rather average poet. Stuck in a quagmire of safe mediocrity, Lisa’s life bursts into full colour when she hears one of her students, Jimmy (Parker Sevak), reciting an enigmatic and evocative poem. It transpires that he’s written it itself, and that he has more to give, a true child prodigy. Lisa’s appreciation soon mutates into obsession.

Lisa’s growing mania around Jimmy is deeply uncomfortable to witness and, as it takes over more and more of her life, makes for a propulsive story that you can anxiously feel going off the rails. Gyllenhaal’s fantastic performance is absolutely key to making this all work – without her sterling work, there wouldn’t be a central conflict, as Lisa’s actions are clearly wrong and only increase in their inappropriateness as her obsession progresses. She’s absolutely not a good person – she puts her name in Jimmy’s phone to call him at home, plagiarises his work, and completely fails in her duty of care to him – but Gyllenhaal brings a genuine wide-eyed sadness that keeps Lisa at least a little relatable.

Western schooling systems tend to ignore or even actively suppress the sort of difficult, artistic gift that Jimmy has, and in never giving him a more healthy support system than Lisa, Colangelo’s script offers a damning take on the way America nurtures its artists. Her writing and direction of the kids is also exceptional and Sevak is a remarkable young talent, delivering complex poems to large audiences with confidence and aplomb. Back at home, Lisa’s high-achieving kids seem to be prepping for the same comfortable mundanity that she and her husband are stuck in.

Lisa’s internal conflicts are born from immense privilege – she perceives her biggest problem as not being an artist – and one could argue that The Kindergarten Teacher doesn’t do enough to address this or Lisa’s craven selfishness. It can make for some scenes that keep you at a remove from really feeling for the characters, but, mostly, its such a fantastic role with such a committed and perfectly cast actor in it that these issues fade as you find yourself absolutely absorbed in Lisa and Jimmy’s story.

Written and Directed by Sara Colangelo