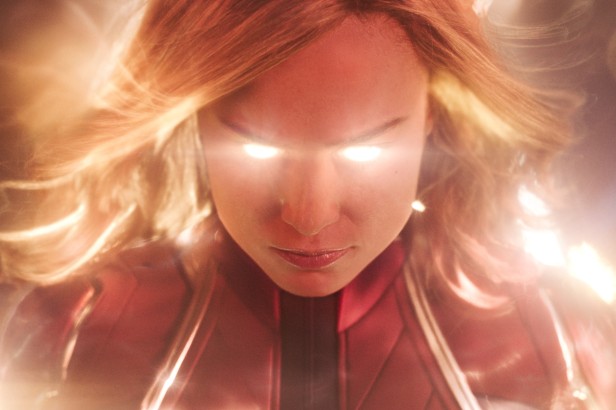 With the exception of the Ant-Man sequel, the MCU really raised its game between 2016 and 2018, bringing genuinely compelling villains, improved action, and ever-trippier visuals in films like Civil War, Ragnarok, Black Panther, and the almighty Infinity War. Unfortunately, next to that stellar company, Captain Marvel looks a little bland, though that’s not to say that it isn’t still a fun ride that introduces us to Marvel’s first solo female superhero with a confident bang. A prequel that both stands alone and keeps hype up for the grand finale Endgame, directors Anna Boden and Ryan Fleck bring just enough of their indie sensibility to keep things entertaining.

Told through an enjoyably unconventional origin story structure, Captain Marvel throws us back into the distant land of the ‘90s, though it takes its time before it actually lands on Earth. We first meet the amnesiac Carol Danvers (Brie Larson) on the alien Kree homeworld of Hala, where she’s part of the Kree army in their war against the shapeshifting Skrulls. After an ambush, Carol is captured and interrogated, reawakening memories of her life on Earth and sending her on a mission to find the mysterious Doctor Lawson (Annette Bening). Crash landing in a Blockbuster, Carol teams up with low-level SHIELD agent Nick Fury (Samuel L Jackson, amazingly well de-aged), who quickly decides to help her.

Zipping between time periods and states of consciousness, anyone not already familiar with the Captain Marvel character will definitely be a little lost in the first third, but the payoff for attentive viewers is powerful, eventually. Carol and Fury’s relationship is definitely the strongest thread as she introduces him to the wider universe and both Larson and Jackson are having a lot of fun in the scenes of bonding, especially when Jackson is baby-talking an adorable ginger cat named Goose. The supporting cast is less interesting, and while Skrull leader Talos is elevated by a reliably excellent Ben Mendelsohn performance with some surprising depths, Jude Law’s suspicious Kree soldier Yon-Rogg is a bit of a waste of a great actor.

The moments in which Carol truly becomes Captain Marvel are thrilling, letting her true power shine as she burns through fleets of spaceships and gets set-pieces more akin to the Richard Donner Superman than any other MCU hero. Outside of these, Boden and Fleck’s action direction leaves a lot to be desired, hiding the unimaginatively staged fight scenes with a dark colour palette and murky lighting. It also feels a little unsavoury that so much of the film’s outer-space style is ripped straight from James Gunn’s Guardians of the Galaxy films after Gunn’s ignominious firing by the studio.

Gunn’s style is also aped in the ‘90s soundtrack kicking in during pivotal moments, with Nirvana’s ‘Come As You Are’ being put to particularly memorable use. It’s when Captain Marvel forges its own path that it’s at its best visually, with flashes of light surrealism evoking both the creepier bits of The Matrix and The Last Jedi. The Skrull shape-shifting is a touch underused, but it does allow for the film’s most memorable and unnerving scenes.

It’s hard to escape the feeling that, like Ant-Man and the Wasp last summer, Captain Marvel is kind of just filling the gap before the main event of Endgame this April, its stakes inherently lowered by its prequel status. Brie Larson makes for an absorbing hero though, selling the joy and responsibility of being one of the most powerful beings in the universe, and Samuel L Jackson’s performance matches Winter Soldier for his best MCU outing yet, and it’s this dynamic that keeps Captain Marvel fresh and lively throughout.

Written and Directed by Anna Boden and Ryan Fleck