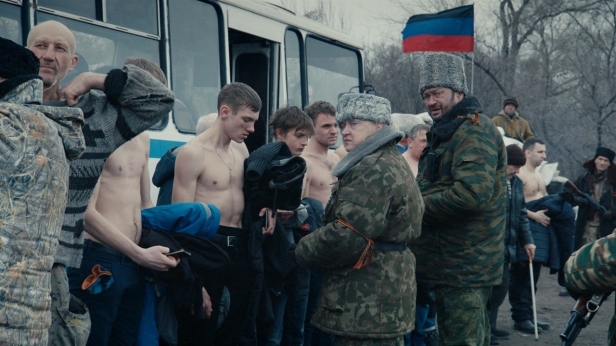 While we are dealing with a series of Fake News crises in the west, here comes Sergey Loztnisa’s Donbass to show exactly how far the problems of the post-truth era can go in a warzone sponsored by one of the world’s greatest purveyors of malicious un-truth. His politically minded piece follows the lives of many different inhabitants of Eastern Ukraine as they try to continue their lives under the Russian occupation and are forced to choose sides. Uncertainty and the fear and tribalism it brings define Donbass, whether it’s following civilians or soldiers.

Without an overarching plot to speak of, Donbass is broken up into 13 tangentially related vignettes. Soldiers and military leaders are everywhere, but actual military action is limited to the occasional shell attack and one brief but searing night-time ambush. Loznitsa focuses instead on either the civilians of the region or the more purposeless troops as their society fractures into ever more bitterly divided yet incomprehensible factions. Most of these scenes are extraordinarily well-choreographed long takes, notable cuts absent until it’s time to move on to the next short story. Some of these transitions are seamless, Loznitsa’s camera finding a new face in the crowd and following them elsewhere, others more decisive cuts away, but all keep the rhythm and tone intact.

The best of the vignettes, like a toe-curling wedding for what seems like Ukraine’s very worst couple, are discomfortingly immersive, disorder and confusion wafting off the screen in nauseous waves. All offer some form of fascinating insight into the creation of chaos in the region, especially the saga of a bunch of actors acting as victims for false atrocities to put on the news. A few, though, definitely outstay their welcome, especially the final scene. It’s a static crane shot where you can barely see the characters or hear the dialogue and it drags on and on and on, testing your patience to the point that it almost ruins the film.

Though it does have a lot of political bite, there’s an emptiness to Donbass. This was, perhaps, inevitable thanks to the vignette format – there are very few named characters and absolutely no one to hold on to as an emotional anchor or particularly care about. It’s a fascinating experience in the moment, but not one that will stick with you for very long after it ends.

Written and Directed by Sergey Loznitsa