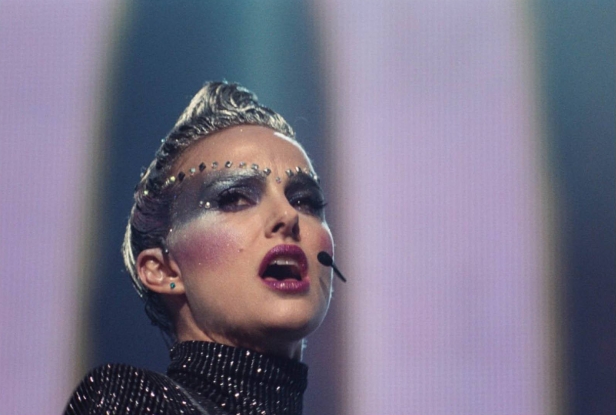 With his blistering debut The Childhood of a Leader, Brady Corbet looked at the intoxicating appeal of authoritarianism and fascism. Now, for his second feature, Vox Lux, he turns his attention to a distinct, but no less potent, source of power and influence – fame and glamour. A major jump up from his already very impressive first film, Vox Lux confirms Corbet as one of the most exciting, definitive voices in American filmmaking. It’s a staggeringly confident and assured piece of work that shows a director more in command of the medium than almost any of his contemporaries and most of his ‘seniors’.

Just as the story of the boy in Childhood mirrored that of 20th Century Europe, so does the life of pop star Celeste (Raffey Cassidy as a teen, Natalie Portman as an adult) run parallel to the path of 21st Century America. Born of a tragedy into a world of anxiety masked by glitz and buzzwords, Celeste embodies the USA, her life carelessly mixing savage violence, shallow pop culture that refuses to make a statement, and a profoundly unhealthy relationship with sex. A sinister documentary style voiceover from Willem Dafoe cements the feeling that you’re watching something important without ever being preachy or worthy.

Vox Lux’s first act is truly extraordinary, with a shocking opening scene that punches you in the gut in the moment and lays the disconcerting groundwork for everything that is to follow. In the aftermath of the event, Celeste is discovered after a video of her singing does the rounds on local TV – a deeply felt and powerful musical performance from Cassidy and Stacy Martin (as her older sister). It’s the first of many songs in Vox Lux by prolific Australian songwriter Sia, with Celeste’s act as an adult a mix of Sia and Lady Gaga.

Even as fame beckons and arrives, Corbet keeps things dark, able to find the grottiest corner of any otherwise glitzy situation. Celeste inhabits a predatory world – her manager (Jude Law in a gruff, Dominic West-ish role) and publicist (Jennifer Ehle) seem to have darker agendas behind their façade of care – and Cassidy is superb at conveying the fear inherent in navigating it. So eerie in last year’s Killing of a Sacred Deer, Cassidy excels again here in another role that attacks the idea of innocence. It’s a fearless performance with much more depth and subtlety than most child actors are capable of.

She also, crucially, does feel like a young Natalie Portman (and later returns to play adult Celeste’s daughter, Albertine), who gives an absolute hurricane of a performance. We see years of Celeste’s poor choices and defense mechanisms reflected in her face and mannerisms, Portman shedding and rebuilding these protective facades on the fly as Celeste deals with family, fans, and the press. It’s the kind of performance that should be recognised come awards, but Vox Lux is far too difficult a proposition to make Academy headway. Brilliantly, Celeste is never made to be ‘likable’ in the way that is so often demanded of female protagonists.

She’s a broken and self-righteous child in an adult’s body, dehumanised by young fame and always deserving of our sympathy, even when she’s throwing a tantrum. It’s the sort of complex, flawed female role that is still too rare in cinema, and Portman brings it to life with spectacular charisma. Vox Lux is definitely a ‘dangers of fame’ story, which on its own doesn’t sound hugely original, but Corbet’s script never goes down the easy or rote paths. Celeste’s teenage pregnancy and the worst of her addiction trouble is behind her by the time we meet her as an adult, allowing Corbet to focus on far more original, interesting dilemmas.

Just before she’s due to play a gig, a Croatian terrorist cell attacks a beach, wearing outfits inspired by the music videos she shot as a teenager. Corbet not only examines the celebrity factor inherent in all terrorism but also excoriates the ridiculous notion of journalists expecting celebrities to answer for crimes that even geopolitical experts struggle to grapple with. Even as Celeste’s steely glare holds through a press conference, Dafoe’s narration chimes in that she simply wanted to hide, a heartbreakingly human moment.

As he proved with Childhood, Corbet is already a master of creating mood through ambitious cinematography and oppressive music, and he doubles down on those stylings here. He can make a standard board meeting into a thrilling set piece and even his opening credits sequence is a stunner, Lol Crowley’s highly mobile camera and the score (composed by Sia alongside the late, great Scott Walker) working in tandem in an unforgettable scene. The climactic performance is a triumph, and everything is designed perfectly, gaudy and bright without feeling like harmless fun, Celeste’s dehumanising golden masks in particular carrying metaphorical weight.

Any film that has an omniscient Willem Dafoe sombrely count us down to the drop in a Sia song is pretty much a guaranteed classic on that merit alone. That Corbet can both earn this moment and back it up with immense technical skill, an insightful and risk taking script, and performers of the very highest calibre is evidence of one of the best films of the year. The natural end to this unofficial ‘power’ trilogy (if that’s even the plan) is surely a study of religion, and I already cannot wait for whatever Corbet does next.

Written and Directed by Brady Corbet