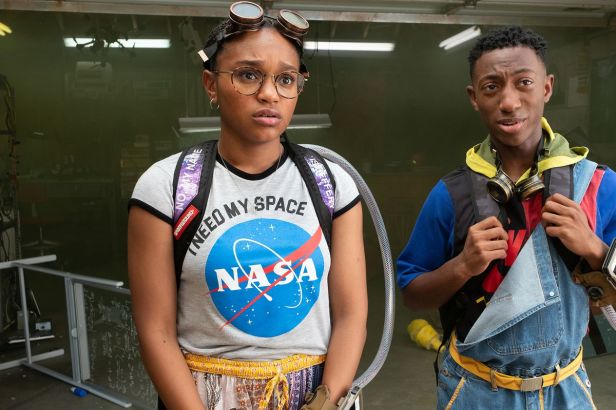 Most time travel movies spend a lot of time setting up their rules, but one of See You Yesterday’s most impressive tricks is in how it lets you know its internal logic with one ingenious cameo. Appearing as a science teacher, Michael J Fox’s presence in the early scenes of Stefon Bristol’s Spike Lee-produced film makes it plain; ‘we’re using Back to the Future rules, and it’s best not to really think too hard about it’. Trying to balance this family fun silliness with a far more serious story about police racism and brutality, See You Yesterday stumbles very often, though, occasionally redeemed by some neat ideas.

We’re introduced to teen geniuses CJ (Eden Duncan-Smith) and Sebastian (Dante Crichlow) as they test out their backpack time machines. Bristol and Frederica Bailey’s script doesn’t spend much time at all trying to explain how these two kids beat the entire world to inventing time travel, nor is it interested in grappling with the consequences of such a discovery. CJ and Sebastian’s main goal with their invention is to get a good college place, not make any sweeping changes to the world. This plan is thrown into disarray when CJ’s brother Calvin (Astro) is murdered by a cop, and she and Sebastian set out to prevent the tragic event from ever occurring.

Calvin’s encounter with the police is undoubtedly See You Yesterday’s high point. It has a horribly effective charge of inevitable violence and outrageous injustice which induces a hazy nausea. Yet, where last year’s excellent The Hate U Give mixed a similar central plot point into a teen drama with skill and care, See You Yesterday does not keep the same level of control of its tone. The mission to stop the shooting is played like a fun caper, and Duncan-Smith’s performance is too slight to convey the extent of CJ’s grief.

Like a lot of these lower budget Netflix offerings, See You Yesterday’s visuals leave a lot to be desired. The CG effects are YouTube fan film-grade and the cinematography is all over the place, its more blatant attempts to be ‘interesting’ instead coming across as amateurishly skittish. Set in the Jamaican community of New York and featuring not a hint of romance between its two young leads, See You Yesterday does separate itself from both the sci-fi and teen movie pack in some refreshing ways, but its fundamental flaws (including a bafflingly rushed and incomplete ending) always drag it down.