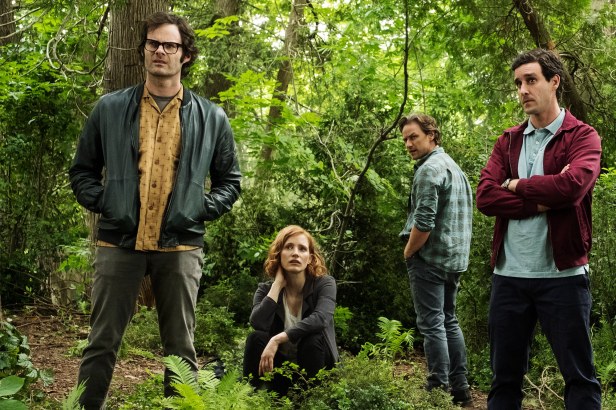 As the credits roll on It 2, you can’t help but feel that it’s the casting team who should take top billing. The matching of adult actors to the kids who made the ‘80s-set first film such a smash hit is so eerily impeccable that you’re drawn back into this world instantly, joining characters you already know and care about, even if their faces are different this time around. It’s this immediate investment that keeps It 2 ticking along as well as it does for its mammoth, nearly 3 hour runtime, an absolute blast of a funhouse horror, even if it is missing some of the magic from the first chapter.

Picking up 27 years after the Losers Club first defeated demonic, child-eating clown Pennywise (Bill Skarsgard) in the sewers of Derry, It 2 efficiently reintroduces us to the Losers in their adult lives. Some of them have escaped the horrors of their childhood, like Bill Denbrough (James McAvoy), now a wealthy author (and obvious stand in for Stephen King himself), and Ben Hanscombe (Andy Bean), who shed his weight and runs a successful architecture firm. Others, like Beverly Marsh (Jessica Chastain), who is still trapped in abusive relationships, have been less fortunate, whilst nervous Eddie Kaspbrak (James Ransone) and foul-mouthed Richie Tozer (Bill Hader), are exactly where you think they’d be, an insurance analyst and a comedian, respectively.

A call from Mike Hanlon (Isaiah Mustafa), the only Loser to have stayed in Derry, tears open their memories, flooding them with painful memories of Pennywise, who they have mysteriously forgotten in the intervening years. The clown is back, and they need to kill it for good. Writer Gary Dauberman cleaves close to the wacky spirit of King’s novel, all the way up to the utterly batshit, nearly-cosmic in scale ending, and the weirdness of the story makes a pretty wonderful transition to the screen.

Director Andres Muschietti makes the most of the larger budget he’s been afforded following the original’s box-office success. Pennywise’s various guises are all brilliantly creepy, from a grotesque and enormous nude old woman to a Thing-like severed head covered in spider-y appendages. The designs and effects work are top-notch, and though Pennywise repeats a few too many tricks to shock and terrify every time, his scariest and most brutal moments still make a huge impact, even earning some sick laughs, particularly when he goes after Eddie and Richie.

Skarsgard’s performance as the villain remains extraordinary, contorting his body and voice in truly vile ways, and the scariest scenes are often when he’s at his least CG-adorned. Muschietti has fun with the little details, sometimes letting you see a scare in the dark before it happens, just for a brief second, or subtly tweaking the placement of Skarsgard’s eyes on his face, which has a really freaky effect. Of the losers themselves, the clear standouts are Hader and Ransone (McAvoy and Chastain make surprisingly small impressions as the ostensible leads) – easily the funniest of the group and yet also the most emotionally resonant whenever tragedy strikes.

Ransone has long been one of the very best ‘him from that thing’ actors in America, and it’s great to see him get such a substantive role in a major release. Meanwhile, Hader perfectly taps into the mix of humour and violent darkness that has served him so well in HBO’s brilliant Barry. Richie and Eddie’s relationship is the real heart of the film, a true love between them barely veiled in their thorny, juvenile banter, and it’s they who keep the barmy finale impactful as well as fun. It 2 overindulges on endings – the last 10 minutes are the only time it feels too long – aiming for big emotional climaxes that don’t fit at all, but its great cast and unashamed weirdness ensures that it all feels worthwhile.