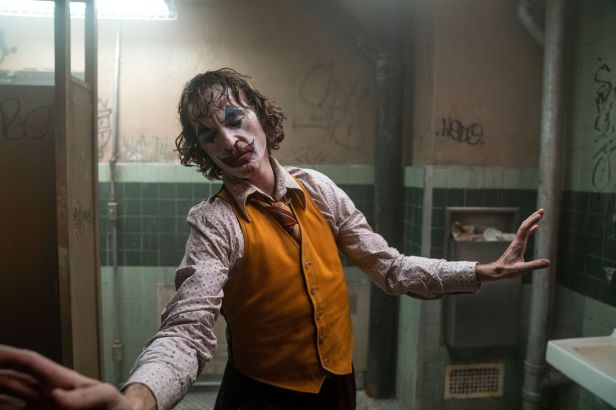 Does Todd Phillips’s Joker represent the next step of cinema? In the future, will we just have to pick how serious we want our movies about children’s cartoon characters to be, on a scale of Saturday morning skits to riffs on Scorsese classics? Hopefully not, but with the outsized role that comic book movies play in our cultural and even moral conversation, it seems dangerously close. It’s a shame, though, that Joker has been caught up in such an insufferable discourse, as it’s actually a pretty excellent character study with something blunt but important to say about the necessity of funding social services.

Hardly the incel anthem it’s been played up as, Joker follows the downward spiral of the life of the dangerously mentally unwell Arthur Fleck (Joaquin Phoenix), who loses his job and social worker in the same week, driving him eventually to a violent murder that makes him a cult hero. Set in the early ‘80s, Gotham City has never more obviously been New York than it is here, and even with mentions of the Wayne family, Arkham Asylum and other slices of Batman lore, it is easy to forget that Joker doesn’t take place in the ‘real’ world.

Arthur’s central animus is not against women or any group that the most poisoned minds of online have taken up against but instead targets his rage and fear at Gotham’s ultra-wealthy. It’s in taking up this enemy that he becomes an inspiration, the rest of the city’s downtrodden populace taking up clown masks after his murders of three Wall Street yuppies while in full make up become an instant legend. It makes Arthur more sympathetic than he otherwise might be (most of his kills are of awful, awful people), but Phillips and Scott Silver’s script is careful in the way it keeps him at arm’s length.

This mission is aided supremely well by Phoenix’s performance. Though it does veer into overacting on occasion, it’s a skin-crawling display that makes it plain just how uncomfortable it is both to be in Arthur’s company and to be the man himself. His escalation from cringing social ineptitude to murderer to cult leader is a tricky one, but Phoenix is more than up to the task. It’s capital A Acting, brash and bold and sometimes transparently gunning for an Oscar, but there’s no denying that it’s compelling to watch.

Phillips clearly has a lot of confidence in his leading man, and when he sits back and just lets Phoenix work, Joker is at its best, with its attempts at some ‘arthouse’ stylings a mixed bag at best. Borrowing/stealing liberally from Taxi Driver, King of Comedy, and You Were Never Really Here gives additional weight to the material, and Arthur’s tragic dreams of being a guest on late night host Murray Franklin’s (Robert DeNiro, functional) show are affectingly pathetic. As for the much ballyhooed interpretive dance sequences, though, they feel mannered and self-conscious, shot nicely enough but always straining against the tone of the rest of the film.

To his credit, Phillips doesn’t revel too heavily in being afforded an R-rating, Joker often darker in its themes and implications – especially when it comes to Arthur’s shut-in mother Penny (Frances Conroy) – that in what it actually shows. Expect no Deadpool-esque gore and dick jokes here. When violence does erupt, it’s brief, bloody, and intimate, sometimes played completely straight, but also used for dark comedy. Joker mainly eschews laughs (though a late in the game ‘we live in a society’ speech is pretty funny), taking its subject matter deadly seriously. This is undercut somewhat by some clearly studio-mandated links to the wider DC world, but for the most part, the choice to have the scary clown movie be completely earnest plays well.

A gritty New York character study, Joker would probably have benefited from not being based on a comic. This story could play out almost identically without the license, and it certainly would have been allowed to stand alone without all the social media furore surrounding it. It’s dark and distressing and your mileage may vary with its nihilist streak, but as a snarling look at disturbed loners in an inherently aggressive economic system, it has an unexpected point to make, and makes it well.