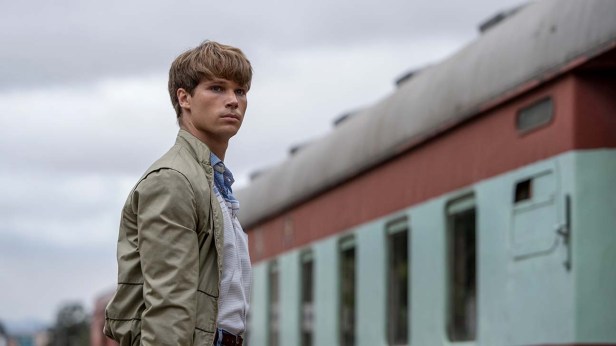 Perhaps the most impressive achievement that Oliver Hermanus pulls off in his new film, Moffie, is its simplest – that you really care about its characters. Set in 1981 South Africa, Moffie (adapted by Hermanus and Jack Sidey from the novel by Andre Carl van Der Merwe) takes place in an army base, where the white recruits are trained to violently uphold the country’s laws of Apartheid. It’s not a group of people in which you’d immediately expect to find sympathetic figures, but in focusing in on glimmers of hope, romance, and friendship, Hermanus (a black South African filmmaker) finds affecting rays of light.

Having long since learned to repress his true feelings, young gay man Nicholas Van der Swart (Kai Luke Brummer) is conscripted to serve on the Angolan border. At boot camp, his lifetime of training to lose emotions serves him well, letting him get by largely unimpeded while other trainees are brutalised by the furious Sergeant Brand (Hilton Pelser). Yet, on a night exercise, Nicholas finds his guard pierced by the confident Dylan Stassen (Ryan de Viliers) in a breakthrough scene both euphoric and excruciatingly tense. It’s a particularly touching sequence in a film full of little moments of grace, as the men on the base form genuine platonic bonds.

Moffie is both moving and distressing in equally effective ways (the title is an Afrikaans homophobic slur), and when the men leave the barracks to finally join the actual war, the battlefield almost comes as a relief. The claustrophobia and fear of discovery is washed away by the intrusion of conflict, which is staged with an impressive mix of intense realism and dream-like hazes. Often set around dawn and dusk, Moffie is a visual treat, the rugged landscapes and roiling skies glowing in the soft, low light. Backed by a superb, unpredictable score, Moffie never lets its gritty subject matter be an excuse for drab filmmaking.

Though there are some plot developments that you may see coming, Nicholas’s personal journey is never simplified down into a typical movie-ready form. He makes as many backward as forward steps, and the beautifully gentle ending leaves plenty of room for interpretation. It’s in this commitment to believability, melded with a bold aesthetic style, that Moffie finds its plentiful strength.

Moffie does not yet have a UK release date