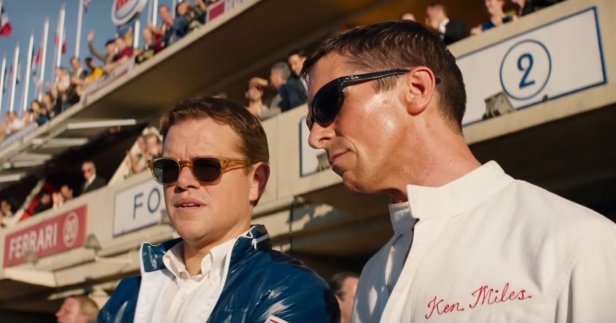 As someone with no interest in motorsport whatsoever, it was easy to assume that Ford V Ferrari (also known as Le Mans 66) would not be for me. It centres on a macho pissing contest over the relative speed of cars (with a bunch of Jeremy Clarkson-esque comparisons and jokes), and culminates in the 24 hour race at Le Mans, a sporting event you would have to pay me to watch live on TV. Yet, with heaps of heart and good old fashioned moviemaking craft, James Mangold makes Ford V Ferrari almost as enjoyable for the uninitiated as it surely will be for hardened petrolheads.

The title conflict was a matchup that became legendary in the racing world, as the often dull and workmanlike Ford Motor Company tried to take the Le Mans title from the sleek, sexy, and lightning fast champions at Ferrari. Mangold balances the technical focus on all the engineering and ingenuity with a classic buddy dynamic between maverick American designer (and former Le Mans champion) Carroll Shelby (Matt Damon) and equally maverick British driver Ken Miles (Christian Bale). In pairing two proper movie stars and putting them in breakneck speed vehicles, Mangold harks back to the action glory days of Paul Newman and Steve McQueen, and it’s refreshing to see a modern blockbuster mounted with those luxuriant sensibilities.

Bale gives a typically big performance as the aggressively Brummie Ken, always aggravating the stick in the mud Americans and saying things like ‘giddy up girl’ when he hits 180mph. He might have been able to tone down some of the chin-jutting, but it’s still a compelling, impassioned display. Damon is lower key as Shelby, but the film’s biggest emotional moments still fall to him, and both he and Bale earn some big, blokey laughs.

In support, Tracy Letts is a lot of fun as the powerful but petulant Henry Ford II, while the always impressive Noah Jupe does a great, moving line in hero worshipping his dad as Peter Miles, doing as much work as the script in getting us to root for Ken. The single female role, for Caitriona Balfe as Ken’s wife Molly, is, unsurprisingly, thankless and rather boring. Ford V Ferrari is a movie for the fellas, and never once strays from that MO. It does mean that the emotional impact is a little stunted, and it’s frustrating that Mangold and writers Jez and John-Henry Butterworth’s embrace of the good parts of old-school blockbusters has to come with such a bad retrograde choice.

Running at two and a half hours, Ford V Ferrari is very impressively well-paced both on and off the track, rarely sagging or slacking, although it could have done with excising an unnecessary and uninvolving final twist of dick-measuring drama in its last act. Once you step into the cars, it’s irresistibly exciting, the drivers pushing themselves and their machines to the absolute limit as Marco Beltrami and Buck Sanders’s score swells.

It all looks great, especially the massive, wide open skies that cover the test tracks, and it’s great to see this much genuine physical craft in a big budget movie. Mangold has a clarity and swagger to his direction that is often missing from tentpole studio releases, making Ford V Ferrari feel more sincere and less by committee than a lot of its peers. It’s hardly a perfect movie, and some of its traditionalism may prove off putting, but it is the kind of big budget release you wish there were more of these days, and is very worth seeking out on the biggest screen possible.