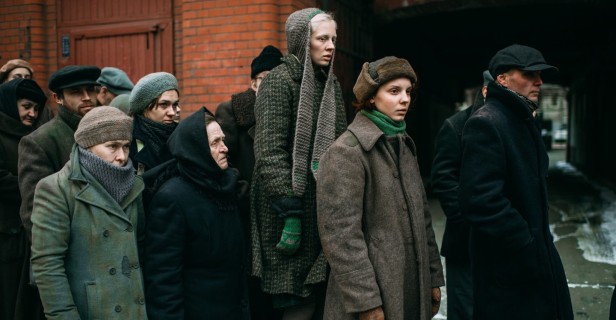 Regardless of if your nation wins or not, wars always leave deep wounds across countries, and perhaps no nation knows this better than Russia. Victorious but decimated after World War 2, the trauma of the conflict spread across the entire USSR, and it’s trauma that Kantemir Balagov’s Beanpole seeks to examine. Looking at post-war Leningrad through the eyes of two young, deeply damaged women, it’s certainly an ambitious and confident film, but all of its bleakness eventually numbs you to its emotional pull.

The beanpole of the title, gangly Iya (Viktoria Miroshnichenko) works at a local hospital and is caring for Pashka, the young son of her wartime friend Masha (Vasilisa Perelygina), who has yet to be demobilised by the military. Suffering from a concussive injury sustained as an anti-aircraft gunner, Iya has uncontrollable seizures in which she is totally paralysed, and when one of them hits during playtime with Pashka, she tragically smothers him. Upon Masha’s return, she demands that Iya provide her a new child (a shrapnel injury has rendered Masha infertile), forcing her into having sex with the local hospital chief.

It’s a grim tale, and while it does certainly have powerful moments, the countless layers of trauma heaped upon its characters not only have diminishing returns but sometimes actively weaken the plot. Iya and Masha’s fractured psyches and untreated PTSD inform all of their dialogue and actions, and though this does have the requisite unnerving effect, it also makes them utterly unknowable, their decisions filtered through a prism to which it is impossible to relate. You’re not quite sure why they do or say what they do, which has an alienating effect.

Balagov’s visuals are stunning, long, crowded takes bringing the 1945 city to life, a city that he imbues with some actual light and odd beauty, instead of the dark grotesquery found in, say, The Painted Bird or A Gentle Creature. His use of colour is brilliant, clashing reds and greens bringing to mind a psychotically perverted Christmas, the celebratory tones making for a fascinating clash with the bleak content. There’s a lot to admire in Beanpole, but not quite enough to actually connect with.