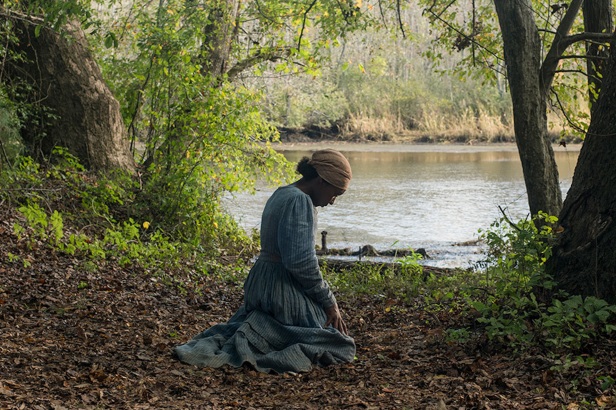 If there’s anyone in human history who could legitimately be called a superhero and live up to all the connotations of that word, it’s Harriet Tubman. A slave who escaped to the North without aid, the figurehead of the Underground Railroad, one of the few American women to ever lead a military raid, a Union spy, and lifelong social justice advocate, her life could fill up three movies and then some. Kasi Lemmons’s biopic realises this, focusing mainly on the Underground Railroad and treating the story more like a superhero origin than your typical heavyweight historical drama. It’s a bold and original choice, though unfortunately one that only pays off in fits and starts.

As Tubman, Cynthia Erivo is Harriet’s big gun, and it’s a responsibility she carries fantastically well. She judges Harriet’s arc perfectly, moving gradually from nervous outsider to commanding and fearsome legend without missing a beat along the way. Lemmons also grants Erivo plenty of opportunities to unleash her stunning singing voice, all adding up to a role that could well earn Erivo a nomination for the Oscar that woyld complete her EGOT. Janelle Monae and Leslie Odom Jr make for solid support as Harriet’s allies, but Joe Alwyn is out of his depth as a cruel slave owner, failing to convince in what should be his most startling scenes.

Lemmons and Gregory Allen Howard’s script zips through Harriet’s life at an impressive, entertaining pace, but in all this hurry they completely lose sight of any tonal consistency. Harrowing moments sit uncomfortably next to peppy montages, and this general muddle carries over to the direction as well. While there are some effectively tense and moving sequences, a lot of the set-pieces come and go without any real weight, and repetitive, weakly-styled dream sequences become increasingly annoying as they interrupt the action.

Harriet’s central thesis – that a direct line to the voice of God was what allowed Tubman to be so successful – also feels strangely reductive, and whilst it does make sense in this mythologising context, it robs her of some agency. Harriet is an odd and messy film, but there is something to be said for making crucial American history so fun and accessible, and, in Erivo, Harriet has the perfect star to tell this most extraordinary of stories.