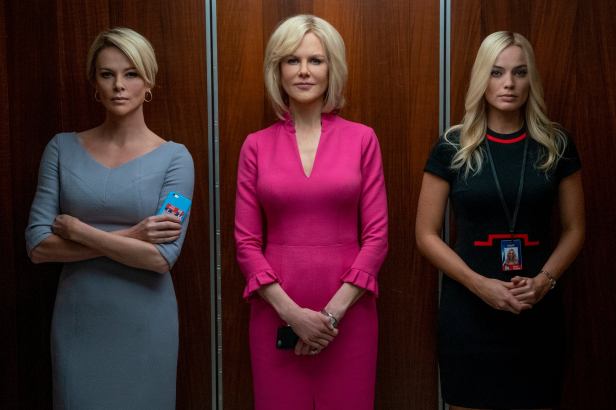 The latest in the ever growing list of ‘Big Short’ movies, Bombshell takes a recent piece of history in which the sheer depravity of the ruling classes was exposed and explains it to you through fourth wall breaks and monologues. This time out, it’s the sexual harassment scandal that brought down Fox News boss and all-round tyrant Roger Ailes. Though Jay Roach’s film does a good job of laying out the step by step facts of the story, it’s just not as compelling as The Big Short was, while being just as much of a scattershot mess as Adam McKay’s genre-originator.

Though we do see plenty of Ailes throughout (played by Jon Lithgow), Bombshell is not about him, but the women instrumental in bringing him down – real anchors Megyn Kelly (Charlize Theron) and Gretchen Carlson (Nicole Kidman), and the fictional Kayla (Margot Robbie). The Big Short co-writer Charles Randolph’s script needles at your liberal sensibilities, not always effectively, demanding that you empathise with these women who, outside of their traumatic experiences at the hands of Ailes, are racist and reactionary stooges for one of the most evil corporations in the world. In the actual scenes of harassment and assault in Ailes’s office, Bombshell is powerfully discomforting, especially when the menacing score kicks in, but it’s a very unfocused film and the various plot threads outside of this primary story are hard to care about.

The writing is witty enough – hell, even the title is a pithy innuendo – and the story moves at an impressive pace, packing a lot of action into its runtime, but where Bombshell really shines is in its casting. Every supporting role, no matter how small, is populated by an actor you recognise and that is perfectly suited to the figure they’re playing. When Rob Delaney or D’Arcy Carden or Alice Eve or PJ Byrne pop up, you instantly know all you need to about their characters, and by far the funniest scene in the film goes to Richard Kind playing Rudy Giuliani.

As great as the casting is, though, not every performance ends up being a winner. Robbie steals the film completely, but Theron is lost behind the Megyn Kelly prosthetics and an overly mannered impression, while Alison Janney turns in a frankly baffling display as Ailes’s lawyer. It’s a mixed bag of performances that suits what is very much a mixed bag of a film, derivative yet important, entertaining yet muddled. As far as Big Short ripoffs go, it’s certainly a lot better than Steven Soderbergh’s miserable The Laundromat, but it can’t match either the original or its spiritual successor, Vice.