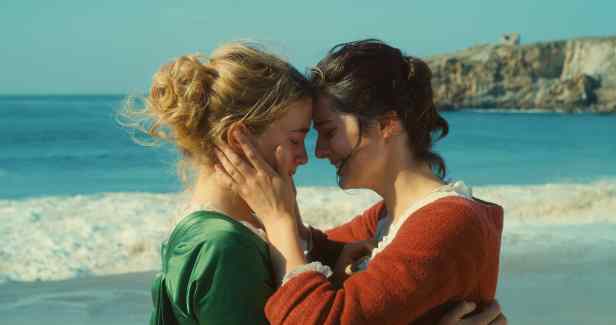 The Oscars generally include some baffling decisions both on nomination day and the night of the event itself, but France started awards confusion earlier than usual last year, thanks to the country’s decision about which film to send as its International Film representative. Portrait of a Lady on Fire, a sumptuous period piece romance both profound and accessible, would be such a no-brainer nomination, yet it was not even given the chance to head to LA and bear witness to fellow Cannes alum Parasite‘s historic victory. Then again, a film with this much composure hardly needs American awards to know its value, Celine Sciamma delivering a tremendously good looking chamber piece that should have no trouble finding an audience.

Set in the 1760s, Portrait introduces us to talented artist Marianne (Noemie Merlant) as she journeys to a remote manor to paint a portrait of wilful former nun Heloise (Adele Haenel), whose mother (Valeria Golino) seeks to marry her off to a Milanese suitor. Posing as a walking companion, Marianne is forced to disguise her true intentions and sketch and paint Heloise in secret. The pair grow close despite the deception, and when Heloise’s mother goes away on a trip, romance blossoms.

Celine Sciamma’s film is brilliant in its study of the act of just looking. Every glance is loaded, stares between the two women changing from cautious to longing to adoring, and this care translates to the film’s look at art and creation, making indescribable fleeting moments permanent, but also robbing them of some truth. Merlant and Haenel’s chemistry burns from the screen, incredible tension breaking in explosions of passion that are ludicrously steamy without being gratuitous or exploitative. Through a female gaze is the only way to tell this story – alongside Sciamma writing and directing, the DOP, Claire Mathon, is a woman – and any of the rare times a man appears on screen, it feels shocking, a breaking of an exquisite peace.

The performances are a joy to watch, letting us bask in the inner lives of the characters and making every word and gesture meaningful. Whether playing cards or joking over a painting session, the happiness the leads have in each other’s company is wonderfully infectious. Once Heloise’s mother leaves, only Heloise, Marianne, and maid Sophie (Luana Bajrami) are left in the house, yet their spirits fill it, and the surrounding coastal countryside, making every room warm. Portrait does take a while to reach an emotional peak, but once there, it’s a gorgeous, affecting trip.

Fittingly for a film about fine art, Portrait is staggeringly beautiful in every shot, marking DOP Claire Mathon (who also shot Atlantics) as one of the world’s great cinematography talents. Painterly precision and framing give a lot of the scenes a dreamlike quality – in particular a village singalong around a bonfire and the various visual references to Orpheus and Eurydice – without sacrificing the clarity of the imagery. The interiors transform from a Hitchcockian maze early on to wonderfully inviting and homely, shifting just as the central relationship does, whilst the majestic landscapes are impossibly pretty. A truly magical colour grade lends a hyper-reality to the environments and costumes, all of which glow with the soft shine of a treasured memory. Sciamma’s is a world you’re desperate to live in, almost as desirable as the northern Italy of Call Me By Your Name.

I didn’t quite find Portrait as moving as many have, but that’s not to say it doesn’t possess considerable emotional power, brought to the fore in a finale that probably should have won Haenel ‘Best Actress’ at Cannes and, if nothing else, the sheer beauty of the film demands you see it on the big screen.

Written and Directed by Celine Sciamma

One thought on “Portrait of a Lady on Fire”