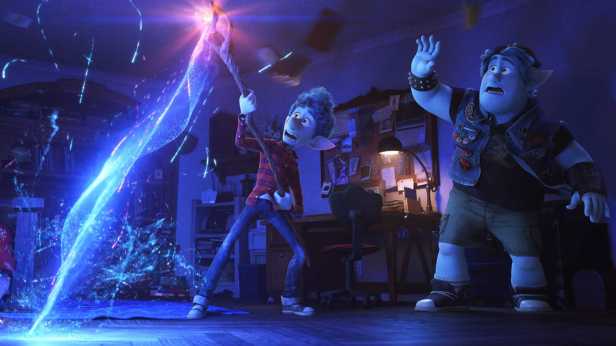 Pretty much every Pixar film is about family, be it traditional (the nuclear unit of The Incredibles, the sprawling extended family of Coco) or bizarre (two monsters and a baby in Monsters Inc, an old man and his talking dog in Up). Rarely, though, do they hone in as specifically on a particular family dynamic as they do here in Onward. It’s a ‘Dungeons and Dragons’-inspired fantasy quest to find a magic crystal, with puzzles and spells along the way, but at its heart is the relationship between two teenage brothers, capturing all the love and frustrations that define this particular sibling dynamic.

At first glance, Onward looks more like a Dreamworks offering than a Pixar one. Set in a world in which magic exists but has been mainly replaced by technology, its mix of humdrum modern mundanity and magical creatures like elves, dragons, and centaurs, there’s a whiff of Shrek to it, and the sweeping fantastical vistas bring to mind How To Train Your Dragon. Digging a little deeper though, and it’s pure Pixar, never letting its setting get in the way of its intensely personal story. 16 year old Ian and 19 year old Barley Lightfoot (Tom Holland and Chris Pratt, respectively) are elven brothers who, on Ian’s 16th birthday, receive a gift from their long-dead dad, Wilden.

Wilden died whilst the brothers’ mum Laurel (Julia Louis-Dreyfus) was still pregnant with Ian and Barley was very small, but the present he’s left is a wizard staff and enchanted jewel that, when combined with a specific spell, can bring him back for a day to see his two grown up boys. Ian turns out to have a natural aptitude for magic, but only gets halfway through the spell before losing control. The crystal shatters, and only Wilden’s legs have been brought back. Thus begins Ian and Barley’s quest to find a new crystal and resurrect the rest of their dad.

Onward’s world-building means it has to start a little slow, and may not be quite lively enough for the youngest audiences, but the arrival of the disembodied legs quickly kicks things into a higher gear. The pace builds and builds, and there’s a lot of very funny slapstick around the legs, especially once Ian builds a makeshift top half out of puffy coats and a pair of remarkably expressive sunglasses. It’s consistently fun to watch Wilden flop around, and writer-director Dan Scanlon also manages to bring warmth and pathos to this very silly character.

While it won’t have you weeping quite like the Toy Storys or Inside Outs of the Pixar pantheon, Onward is as warm-hearted as any of its stablemates, especially when it comes to its understated, moving, and mature ending. Its about brotherly love and familial generosity, and Barley’s refrain of ‘on a quest, you always work with what you have’ is given a profound and beautiful resonance as the finale approaches. Holland and Pratt slot into their roles perfectly, their pre-established familiarity as co-stars in the Marvel universe proving a boon, and I found myself more than once reminded of the magical brotherly dynamic at the heart of John Carney’s fabulous Sing Street. They’re both funny and chaotic in distinct yet complementary ways, Holland squeaky and panicky, Pratt booming and easy-going.

Of course, the animation is crisp and pretty, though not quite as gobsmackingly inventive as the very best of the studio’s output. That a film designed and animated this competently can be considered ‘visually mid-tier’ though, is more a testament to Pixar than any sort of knock against Onward itself. Onward is the first of two Pixar originals in 2020, and though it looks like Soul (releasing this June) will be the real A-Game entry, this moving, jolly fantasy adventure still has the power to captivate.